What Makes an RPG an RPG? Tabletop or pen-and-paper (PnP) RPGs are conducted through discussion in a small social gathering. The GM describes the game world and its inhabitants. The other players describe the intended actions of their characters, and the GM describes the outcomes.[14] Some outcomes are determined by the game system, and some are chosen by the GM.[15]

This is the format in which role-playing games were first popularized. The first commercially available RPG, Dungeons & Dragons (D&D), was inspired by fantasy literature and the wargaming hobby and was published in 1974.[16] The popularity of D&D led to the birth of the tabletop role-playing game industry, which publishes games with a wide variety of themes, rules, and styles of play.[17]

Personally, I think that definition is kinda vague, but maybe we do need a vague definition.  4e players (alright, some of the more vocal proponents) often the see Old School RPGs, where the GM is empowered and not every situation has a rule as some sort of glorified group story telling event.  Old School players (I'll include myself so you know where to aim the slings and arrows) see 4e as a glorified board game / individual sized unit wargame hybrid.  I'm surprised it lacks rules to define when, where and what dice to roll when you PC has to defecate (that's a joke son.  as in taking the situation and making an extreme example. no 4e players were truly harmed making this comment).

So, lets take a step away from D&D and it's various incarnations for a moment, and take a some classic RPGs.

Rolemaster - rule heavy as all shit, yet enough gaping holes in it that a GM had to be ready to improvise.  Charts galore and very lethal.  Even high level character's could die with one lucky blow (or scratch from a cat)

RuneQuest - very lethal combat.  Where you might get into combat in Rolemaster to play with the crit charts, a wise party avoided combat whenever possible.  Skill based, you generally sucked and most stuff until you got further along.

Call of Cthulhu - lethal combat.  Letha game.  Your C might do something heroic, but they weren't heroes.

Traveller - lethal combat.  Your starting skills were your skills for life.  No expo ladder to climb.  Best sci-fi RPG I ever played, bar none.

Tunnels & Trolls - an early fantasy RPG without the funny dice.  Horrid layout in the rulebook, excellent simple system for role playing.  Less rules then even OD&D from covering situations.

None of these required a grid / battle map.  Scratch out a quick diagram of the situation and go with it.  There was generally less emphasis on the PC's skills and more emphasis on Player skill then in later editions of D&D.  (by player skill, i mean "making decisions as a player to increase the chance of your PC surviving", not "look at the tower of dice I can build before it all falls down!" although that was fun too) 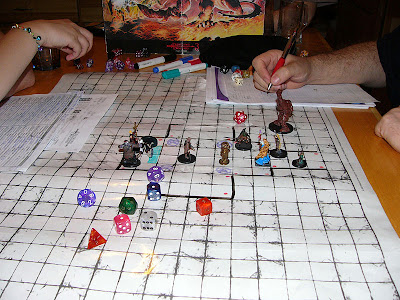 I played in a Warhammer 40k Dark Heresy campaign for a bit - no grid.  I don't think any of the FATE system based RPGs require a grid.  Mongoose RQ2 / Legend?  Doubt it, could be wrong.  Pathfinder?  It's like 3.75 D&D, so i think the grid is etched into the system.  Heck, most of the recent indi RPGs dont require grids.

Come to think of it, D&D from 3e on is probably the most heavy game in regards to rules, skills powers and the like (well, excluding the universal games:  GURPS, HERO, Rifts (so good, so broken) and such.  Heck, even Savage Worlds can break the rules down to a fairly slim, undersized paperback.

We have had rules heavy RPGs since the beginning of the hobby.  Heavy rules and light rules fill their own niches.  Where is 5e going to fall in this mess?  Is it going to fill more then one niche?  Can any game cover both ends of the spectrum?

Everyone has an ideal system / style / comfort zone in the role playing hobby.  You have to match the player to a system, and then match other players who also match the system.  It aint easy.

5e claims it will fill multiple niches.  Multiple desires.  It will be what you want it to be.  A doppelganger if you will.  Or a Frankensystem, with a 3e base and other generations of D&D grafted to it.