From Nada to Alotta - Balancing the Time 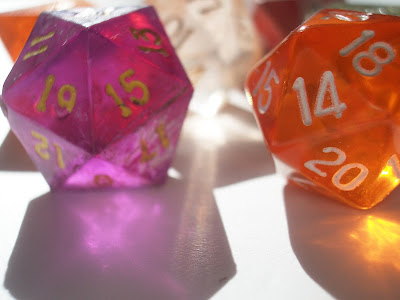 When the Castles & Crusades game I had been playing in via Fantasy Grounds came to an end early last year (and that had previously dropped from a weekly game to a monthly game) I was suddenly left with no regular gaming on the horizon.  If it wasn't for a session of play testing for White Haired Man, there would have been no gaming for me in 2011.

Truth to tell, by the time summer arrived, wedding plans, preparations and the like drove thoughts of gaming from my mind.  And so it was, until 2012.  Now I find myself married and in a steady game on Saturday Nights and steady gaming on Wednesday Nights.  The first game due to a fortuitous invite, and the second thanks to my wife, who told me to "Go Forth and Game!"  She has designated Wednesday night as her Yoga night.  The Saturday night game if via Google+ Hangout, so I'm still home.  I think my wife threw that one in as a freebie ;)

Dare I ask he for a third night?  I'm not sure if I can, but there is a Legends / RuneQuest campaign starting damn soon, and it looks cool.  Problem is, for the next few weeks it's on Saturday afternoons, and I have a contractor working on my kitchen the first saturday, a birthday party for my wife's brother and sister the following saturday, and a housewarming party I previously committed to the saturday after that.

Sigh.  My limit might be two nights without upsetting the balance of wedded bliss.

How many games can you squeeze in weekly / monthly before being shown the dog house? ;)