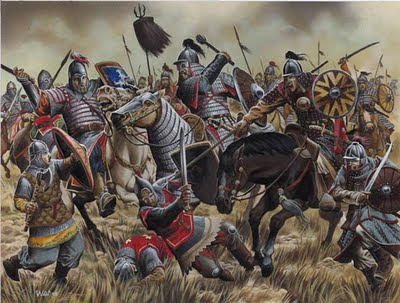 In an earlier column, I mentioned that one of the goals of the new iteration of Dungeons & Dragons was to unite the editions. Judging by the reaction, this is a contentious topic, and an important one. So let's delve into it more deeply.  (original article without my comments is here)


First off, why is that our goal? There are many reasons. First and foremost (is that we need to convert the greatest number of gamers who felt disenfranchised when 4E was released.  Please, come back to WotC, we are waiting for you!), however, is that if you're playing any version of Dungeons & Dragons, you're a D&D player and a "part of the fold." (Be that as it may, the play styles between the two extremes of the editions are very nearly polar opposites.  It goes beyond just "the rules") The days of edition wars and divided factions among D&D fans are over. Or at least, they should be. (In fact, they should have never started.) (Okay... they are not over.  The fact that WotC themselves fanned the flames of the 3e / 4e schism makes me suspicious of this line.  But Monte was gone before the decision was made to go to 4e, so I will give him the benefit of the doubt)  I'll be frank: the fracturing of the D&D community, no matter what the cause, is just foolish. (It's foolish because WotC needs gamers to come back to the fold under 5E if they are to make the newest edition a success.  Maybe they did learn from the last Edition War)  We all have far more in common than we have differences.  (Not so sure you can bridge the OSR / 4E gap so easily, but I like Monte, so we'll see)

So a rules system that allows people to play in the style that they like, rather than a style that a game designer or game company wants them to like, makes a lot more sense. (and is a great trick if you can pull it off) As a designer myself, I know that it's not my job to convince you to play D&D in a particular way. It's my job to give you the tools you need to play the way you want and then get out of your way. And that's what the new iteration of Dungeons & Dragons is meant to be about. There is no wrong way to play D&D (sure there is, but you just dont want to tell us ;).

But what does it mean to play in the "style" of various editions? That's a complex issue. It has involved, for me and my fellow designers, looking at the different editions and trying to distill down the essence of each one. For example, is it important that "elf" remains a class to someone who enjoyed Original D&D (1974) or Basic D&D? I'd argue, no. What's far more important for that player is an open-ended system with a lot of emphasis on the Dungeon Master, lots of exploration, and simple mechanics that enable fast combat, to name just a few things. (In other words, everything that 4e is NOT.  4e took the emphasis away from the DM, away from exploration, away from simplicity but added long combats and a challenge for just about everything)

As a contrast, AD&D (that is to say, 1E) involved more specific mechanics to create a more unified play experience from table to table. This included a more careful eye toward "realism," or perhaps more accurately, "simulation." But by modern standards, the game was still fairly simple, and things moved quickly. There were options for miniatures and tactical play, but most 1E fans did not use them. (Likewise, there were options for very high simulation, such as weapon speeds and the weapons vs. armor table, but most people didn't use them either.) (I'm not so sure if these were options or rules 90% of us chose to ignore, but whatever, call them options) 1E fans—and I'm of course overgeneralizing here—want many of the same things that BD&D lovers want, but with a few more options and a bit more simulation.  (Fuck me, I read that as "a bit more stimulation".  I'd be happy with that too ;)

Then 2E came along and made only minor changes to the rules, but it made important changes to the style of gameplay. The Player's Handbook was not significantly different, but the Dungeon Master's Guide was. We started reading phrases such as "it's all about the story." Worldbuilding became more important than adventure design. If in OD&D one DM might say to another, "let me tell you about my dungeon," in the 2E era, a DM might say to another, "let me tell you about my world." (who had time for world design in the 2e era?  TSR was putting out a new world every few months it seemed - they had world design down pat) As the system developed with many supplements (and way too fucking many unbalanced Complete Handbooks - if Wizards goes this route I'll start my own Occupy Movement in their HQ lobby), simulation and game balance (see, he knows balance went out the window with kits like the Bladesinger) took a back seat to story, setting, and interesting characters. Kits and nonweapon proficiencies, some of the major new(-ish) changes, showcased character development in interesting ways. This suggests that, broadly speaking, 2E players enjoy epic storylines and tools to create well-developed characters.  (it suggest sthat maybe you want to make sure you don't turn the system to shit with unbalanced kits)

With the advent of 3E, which brought along many significant rules changes (mainly the OGL as a rule for third party publishers), the game's design once again embraced simulation, and balance became more important. Character development became even more of a focus (see, he doesn't mean defining your character as a "person", he means as a pile of stats, skills, feats, yadda yadda), and all flavor was backed up with mechanics. Less responsibility was put upon the Dungeon Master as various actions and options were specifically mechanically defined and standardized. (This is when the game started becoming, dare I say it, "complicated" and no longer suitable for a pick up style of gaming) Combat became far more complex (especially with 3.5e, as the grid became all important), and while it was also more interesting, it moved more slowly. Miniatures became an important focus. Fans of 3E want even more options for their character customization—skills, feats, and so on—and the ability to play interesting, tactical combats with a high level of detail. (Again, with 3e you could still go gridless - 3.5e, not so well)

When 4E debuted, the game once again underwent a radical change. This time, the most significant change was the way character classes were expressed. Balance and standardization became even more important (and thus ruining the game {it's my opinion, I can say it} with standardization), combat more complex (why the hell would we want something more complex the 3.5e combat?  it's a roleplaying game, not a wargame), and cinematic action and heroic power levels were the focus. Character powers ensured that everyone always had something interesting and dynamic to do every round (which is just how real life is... right?  No, its how a fucking MMORPG is.  Dungeons & Warcraft). The DM had even less responsibility (and you would want to be a DM in 4e because?  Bueler?  Bueler?), and her job was made easier with interesting innovations to NPC and monster design (but the combat was more complex, and there was a challenge for everything - which simplifies things how?  unless, what is meant is that you really didn't need a DM in 4e.  That could be cool!). Miniatures and a grid were absolutely required. (Boo!)  4E players like even more balance and tactical play, and they want even more interesting and straightforward options for their characters (and this will match with earlier editions exactly HOW?). In addition, simple and quick preparation for the DM is a must.

A lot of sweeping generalizations? Sure. I was/am a fan of all of those versions of the game (I call friendly "Bullshit!" here.  Monte is most certainly NOT a 4e guy.  He designed 3e.  What do you think the core of 5e is going to be?), so some or all of those descriptions apply to me, and not all of them are compatible in a straightforward manner. Still, it's useful to begin to realize the various kinds of needs and desires different players and DMs have. To truly unite all the editions, the game needs to cater to all of them (best of luck.  Alas, poor Monte, we knew him well ;) In short, people need to be able to play the game that they want to play.  (Which we are.  Will 5e also fill that role?  Time will tell)

Maybe I did some ranting up above.  It's accurate ranting tho' ;)
Posted by Tenkar at 10:19 PM