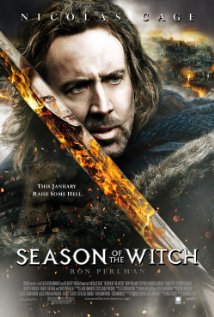 Is it just me or it Nicholas Cage in just about every third movie released these days?  That being said, I liked Season of the Witch.  Even more surprisingly, my fiancee enjoyed it too.  Yep, she stayed awake throughout  the whole thing.  Good thing we found it on Amazon on Demand.

The storyline of escorting the witch to here trial at the abbey could easily be stolen for an RPG scenario if it hasn't already.  The twist near the end was actually kinda neat and wasn't telegraphed from a mile away as most movies tend to do with their twists (or maybe I'm just good and connecting the dots as they are presented).

Some of the acting is a little stilted, and there isn't much of an attempt to speak with authentic accents, but really, who cares?  The story makes for a great ride.  Besides, I think Nick Cage with an English accent would be painful to listen to.

Last week I had my fiancee watch Dust to Dawn for the first time.  I told her it was a movie that abruptly changes gears, but didn't tell her the twist.  This time, when the dead monks started dropping like ninjas, she said: "Holy shit, this just became a Zombie Movie without dropping the actually story.  They shoulda done that with Dusk to Dawn."  She may be right.

In any case, as a gamer and a fan of fantasy (and a history major) I will put my stamp of recommendation on Season of the Witch.  There are some good lines in it too that I wouldn't mind using at the gaming table.  I might need to watch it a second time to write them down ;)
Posted by Tenkar at 8:24 PM