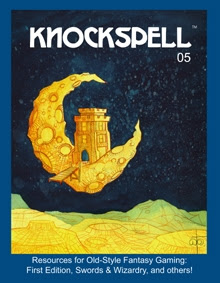 It's aways nice to have another issue of Knockspell to read.  Issue # 5 is no exception.

Nicely filled with an assortment of gaming goodness, it hits a sweet spot between adventures and articles.

Actually, the article on how to create adventures using Scrabble tiles as aids still has me scratching my head -  the concept works, I just don't understand how anyone thought up the concept... heh

There's a lot of stuff to read in this issue, to be used in S&W, LL or your clone of choice.

Lets see, here's the table of contents for this issue: