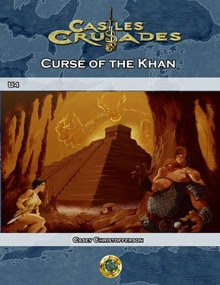 Castles & Crusades is the game that drew me back to RPGs, so I always look forward to each release (except Crusader - here's hoping the improves).  Curse of the Khan is the latest adventure (in PDF) from the Troll Lords, and it's a whopper.  It clocks in at around 70 pages.  (If you bought a PDF copy of the CKG before the GM Week sale, you should have an email from the Trolls telling you how to get this adventure for free)

The adventure is more like 3 linked adventures, so expect to get at least 3 sessions of gaming out of it.  It covers levels 6-11 (although you can scale it lower / higher slightly if need) and it assumes that each of the 4 core adventuring roles will be filled.

You'll have to set  your backstory up, or rather flesh out the one that is given, to get the players where they need to be.  Not a big deal, but I felt it should be noted.

In addition to the 3 fairly distinct adventures sections, we also get a new PC usable race, 8 new magic items and 15 new monsters.  Oh, and maps.  13 levels of maps.  Did I say it's pretty well loaded?

In days long gone, the Crawling Queen, a creature of the abyss, lorded over the lands of man, elf and dwarf. Her reign was terrible and the lamentations of the suffering people carried into the heavens! In time a dwarven prophet, St. Canor, came to their aid and, leading a bold group of heroes, he overcame the Queen and bound her in a temple. He set the bodies of his fallen comrades to guard her and placed wards upon them to imprison her. Over their tombs and her cell, he built a great temple. And there she lay for many eons.

But time passes and all things decay. So it was with the temple. Falling into the ruins came a host of her minions, they threatened to break the wards and bring the Crawling Queen back to the world. Such a horror must be prevented.

But the dangers are far greater than the Temple, for in her tomb beneath the ruins lies horrors unimagined and dangers to pry the skin from mortal men's flesh; and, deeper still, lie the dungeons where the darkness is complete and the horror long buried is come to life.

All this and much more await those willing to accept the challenges offered in The Curse of the Khan. The Curse of the Khan combines fast paced action with challenging role play and mind boggling puzzles at every turn. Including four brand new monsters and a plethora of new magical items, The Curse of the Khan is designed to keep your players on their toes, providing hours of dungeon crawling mind mangling fun!
Posted by Tenkar at 6:17 PM