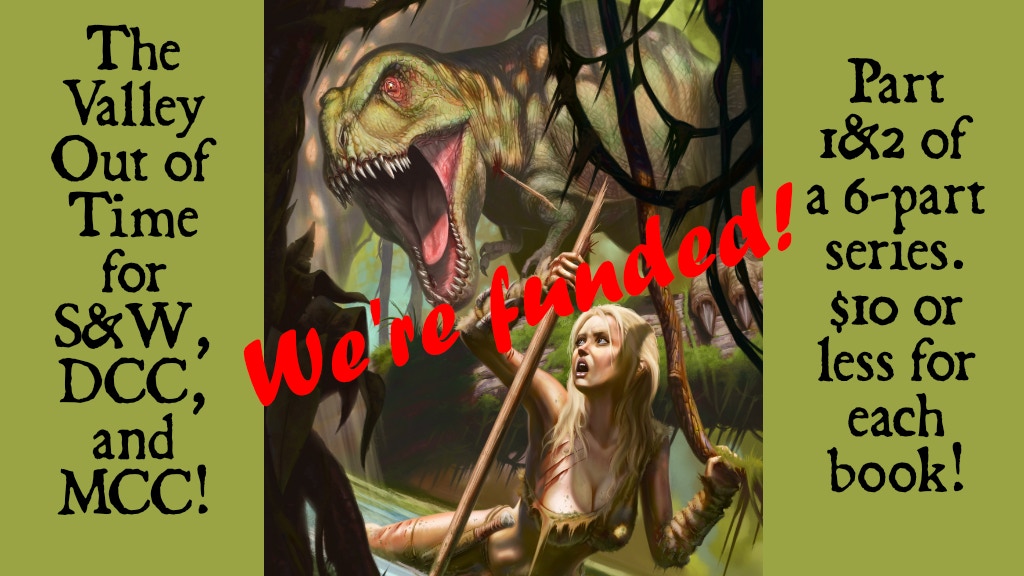 Okay, let's start with the part most folks don't say out loud. I consider Skeeter a friend. I know, for some that is a scary concept, but I actually like and respect Skeeter. I also consider Skeeter to be a highly skilled adventure designer. He has a skill that many believe they have, but few match.

Now that that part is out of the way, Skeeter's newest Kickstarter is The Valley Out of Time series for S&W DCC MCC. Yep, The Valley out of Time comes in three flavors, and not one is 5e. Good for Skeeter ;)

The Valley Out of Time is a series of 6, 'zine-sized adventures from SGP. This valley can be placed in any ongoing campaign and is set in the "Neanderthal Period" of tech development. Huge monsters – both dinosaurs and otherwise – and devolved humanoids plague the area, and only the hardiest of adventurers will prevail! This series of adventures borrows heavily from classic dinosaur art, books, and movies; if you have ever seen a classic Frank Frazetta or Roy Krenkel painting, or read or watched The Land that Time Forgot, The Lost World, Journey to the Center of the Earth, One Million Years B.C., The Flintstones, any Ray Harryhausen film, etc., you are going to feel right at home.

Get your friends to pack-attack these encounters!

Each book is a 5 1/2" x 8" saddle-stitch (stapled) "zine size" offering, ranging from 2X to 3X (or more!) pages. The price for the books is based off calculations for the 2X page book, so the larger books are just more content! Enjoy!

Welcome to the Valley

Welcome to the Valley is Part 1 of the series, suitable for entry level characters and those beginning their explorations into the Timeless Valley. Four to six characters of level 1–3 should find the encounters presented herein challenging but manageable. This entry to the Timeless Valley series introduces the characters to the valley, some of its peaceful and helpful inhabitants, as well as several of the less hospitable ones. The characters encounter a humanoid camp, and 3 additional animal encounters to give them a taste of what they're in for with further exploration. Welcome to the Valley includes 4 new/modified valley inhabitants, an Appendix showcasing where to find existing adversaries for the valley, and a brief explanation of what the Timeless Valley "is"; it is 20+ pages in length, with a map of the initial humanoid camp, original art, and a convenient, easy-to-follow layout.

Exploring the Valley is Part 2 of the series, suitable for more experienced characters in the valley. Four to six characters of level 2–5 should be challenged by the encounters provided, including stumbling upon a humanoid hunting group taking down a giant bison, a massive saber-tooth cat having some lunch, and the Timeless Valley's version of an owlbear (think owlbear, BUT THINK BIGGER!). In addition to these encounters, 6 new valley inhabitants are presented, and Appendix B offers Random Encounter Tables, suitable for fleshing out the valley, or for use in any hex crawl involving the jungle, grasslands, or rolling hills. The encounters presented cover 13 pages of classic "Appendix N" and "Frazetta-esque" adversaries to give the classic stop-motion movie experience! Exploring the Valley is 30+ pages in length, with original art, tables and charts galore, and plenty of information to aid Gamemasters to fill up hours of overland adventuring!