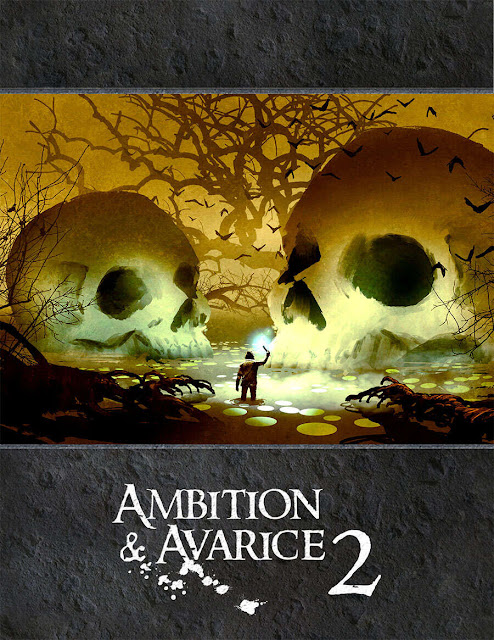 I will freely admit I am biased in favor of Ambition & Avarice, as I was involved in playtesting both the 1st edition and the 2nd edition versions of the ruleset. What can I say? I am blessed to be part of this amazing community of creative gamers. I also consider Greg Christopher to be a good friend.

That being said, Ambition & Avarice IS a very well thought out OSR ruleset. It feels very familiar, yet at the same time presents options that you don't normally get in an OSR ruleset.

How best to comment on A&A? How about I paste the elevator pitch from the DTRPG write up, and comment as we go along?

Ambition and Avarice is an action-adventure roleplaying game with an easy-to-understand OSR chassis. The 2nd edition maintains focus on character classes and races that walk the line of respectability. (like I said above, it feels comforatable and familiar, and then its new and excitingly different)

2nd Edition at a Glance:

- 12 Classes: Brigand, Conjurer, Cultist, Elementalist, Enchanter, Knave, Ranger, Savage, Shaman, Witch, Veteran, and Zealot. (I love the take on classes - I need to play a spell caster next time around)

- Pre-built backpacks to grab off the shelf for quick character creation. (I did this to a lesser extend with SWL - its simply a no-brainer these days)

- The most comprehensive medieval fantasy equipment chapter in the RPG industry (I checked). (woot! and you can steal use it for other OSR games too :)

- Monster trophies to take after the battle and use as magic items; Cyclops eyes, Giant frog tongue, Nymph hair, and more. (another thing one could easily steal for a different system of choice. It is very well done here)

- Catalysts: A spell component system that is actually fun to use. (didn't play a caster in playtests - can't say one way or the other)

- Clear and useful rules for hex crawling, managing retainers, and building your own barony. (solid stuff and a must read for all OSR gamers, regardless of ruleset)

- A complete customizable cosmology system with major/minor gods and demigods of your own creation. (more depth than I usually use, but good to have for the players tha "want to know")

- NPC design system mixing reaction rolls and attitude to determine exactly how far each NPC will go to help or harm you. (built for improv stylr DMs like me)

- A dungeon familiarity mechanic to allow the players to gather information BEFORE going down the steps into darkness. (an interesting twist)

- Monster entries include formulae for creating your own twisted undead.... if you don't mind dabbling in necromancy. (need I repeat mysef? I TRULY REALLY need to play a caster)

- Treasure chapter with rules on magic item creation and numerous treasure tables to stock your dungeons. (fun and inspiring as a DM)

- Expertise in a class-specific task; like the Conjuror's binding circle ability or a Cultist's ability to sacrifice humanoids to curry favor with their god. (this does a great job in defining the various classes and differentiatimg them from each other)

- Identification of something in the world; like the Witch's ability to identify sickness/disease or the Savage's ability to recognize familiar scents and follow them. (fun stuff)

- Recruit followers to serve as henchmen; like the Knave's ability to recruit spies or the Conjurer's ability to create imps to serve them. (this is awesome and again, highly yokeable)

Six flexible magic-using classes have a varied selection of new and exciting spells. There are easy methods to create your own enchantments, raise unique undead to serve you, or craft cursed items to give to your enemies. The non-magical classes have their own rich choices and don't fade away in importance as the magical characters advance in level. (check!)

These classes can then be combined with 10 classic fantasy races; from elves and dwarves to orcs and lizardfolk. You can combine them however you wish, creating everything from goblin rangers to dwarven brigands. Your race is no longer central to your destiny, playing a marginal role in restricting your actions in the game world. (I do love this aspect)

The entire package is designed to allow quick character generation and presented in a format that is clear and easy to read. The text is packed with expanations of not just the rules, but the reasons behind the rules. It is an ideal choice to hand to a new player who is looking to get into the great game, but turned away by dense technical rulebooks with byzantine organization. The adventuring mechanics are also OSR compatible and allow easy integration with a variety of old school campaign material. You can pick up this game, grab an old module, and get playing in a very short amount of time. (this is literally true. while not as quick as generating a SWL character, it is quicker than every other OSR game I've played or run)

All in all, and excellent ruleset AND resource for other OSR rulesets. Did I mention A&A has a hyperlinked Table of Contents?

The Tavern is supported by readers like you. The easiest way to support The Tavern is to shop via our affiliate links. DTRPG, Amazon, and Humble Bundle are affiliate programs that support The Tavern.  You can catch the daily Tavern Chat podcast on Anchor, YouTube,  or wherever you listen to your podcast collection. - Tenkar
Posted by Tenkar at 6:58 PM