Is Rules as Written Really Still a Thing? 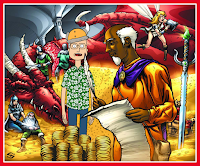 I was scrolling through Facebook, which as an aside I'm kind of sad to see Facebook supplant Forum Boards as seemingly the place to find interaction between players online, and I came across a request from one GM on how to do something Rules As Written (RAW).

That was a playful "lovetap" to the nuts because I have a love/hate relationship with RAW.

Unless you've not read much of my previous posts, which I wouldn't blame you, you'll know I used to play quite a bit of HackMaster and organized a lot of tournaments for KenzerCo. Thing is tournaments really require everyone to play RAW so there is a baseline for fair play. Believe me, this is a HUGE pain in the ass.

Now one thing you probably don't know about me is that I am extremely predicable when playing a new game system: I always try to play the best archer I can make. Now I do like archers, but not enough to warrant this choice. No, I always run archers first because this gives me a baseline to compare the different systems.

I mention this because archers, more specifically Fighters specializing with a bow, kind of suck at the 1st/2nd Edition + home rules blend that was HackMaster 4th Edition. Big cost, terrible payoff and at high level fricken Crossbow specialists were as fast (if not faster) than bow specialists! What was worse was the firing in combat rules....well not the rules so much, but the RAW work-around.

I won't go too far into the weeds here, but what would happen is if you wanted to fire into combat, as a player you would specifically indicate you were trying to make an extremely difficult called shot on a friendly combatant! I think the most common was telling the GM, "My guy is aiming to shoot off the left piggy toe of my buddy engaged over there in melee."

Now I was able to write a new set of rules handling a couple of archer issues that was accepted by HackJournal, so they basically replaced this mess and became new RAW, but every time I hear Rules as Written I inwardly cringe, thinking of how many perfectly good games have been tainted by bad rules.

OK, "bad rules" might be a bit of an oversimplification and a judgement call, but I know I've seen plenty of what I think are bad rules. Thing is we all have what we think are great ideas. Things we think we can do better, and sometimes we're right and sometimes we're wrong. I got to write up some drowning rules for the new/current edition of HackMaster when writing an adventure and they were thrown out in favor of some much clunkier rules that probably fit better with the existing rules. I remember thinking my rules were better at the time, but I'm biased, and I cannot even remember what they were, so they couldn't have been all that.

Now I could be waaaaay off-base here, but I think that this whole idea of people (ok, game designers) thinking they know best and some inherent desire to play RAW is one of the reasons we have some many, gobs even, of OSR game systems right now. It seems like everyone has their own take on B/X and access to a printing press. Now don't get me wrong, there's a lot of great stuff out there now, but there's a lot I look at once and think, "I don't see the point".

I've already mentioned that I have a love/hate relationship with RAW and what I'm seeing really makes me think that I'm not alone in this regard. Thinking about the current market for these OSR games, and what I perceive as a potentially-fractured-but-not-really player base what I've concluded is that the average GM/players kind of wants a RAW game, but ends up taking the closest system to their liking and lays a few tweaks to the rules for use in their game. Sometimes a lot of tweaks......

I'm totally cool with this BTW and it really describes how I play. I really (think I) want a crunchy RAW game, but I've yet to find a system that has everything I want, but I (pretty much just now) have come to the conclusion I'm never going to find it unless I publish my own variant....which I'm NEVER going to do (ability, motivation, funds, ROI....take your pick)...and that's OK.

Taking my current home-game I'm in as a player for example. There are a few things I'd like to see rules-wise in the game, but it totally occurs to me that it really doesn't fucking matter. For example: I'm running a Magic User and think it'd be great to use my old HackMaster rules to figure out the details on my spellbook. Number of pages, size, etc. I don't need my GM to add that to the RAW to make me happy as I can easily just do that myself and say I'm lugging around this massive tome and I have my backup spellbook with my henchman. Also, by not having this huge ruleset available to essentially restrict us in how we do things he can introduce new rules....that could be good or can suck balls. Either way there is an extra level/layer of fun because of this unknown quantity.

I'm kind of looking forward to GMing again in the future. Oh I'll be running a RAW game, but it definitely won't be single writer/publisher ruleset. No, it'll probably be Old School Essentials as a base with a generous helping of New Big Dragon Games Unlimited stuff, a lot of d30 tables, and whatever cool shit my players bring me (that we agree on!). Yes, you Magic User will have that big-assed clunky spellbook, but how that gets figured out will not be a RAW situation.

As a bit of an aside, and more like extended/recommended reading, if you have access to Gary Gygax's Master of the Game, Chapter 6 would be a good read. Just saying.
Posted by Christopher Stogdill at 2:00 AM