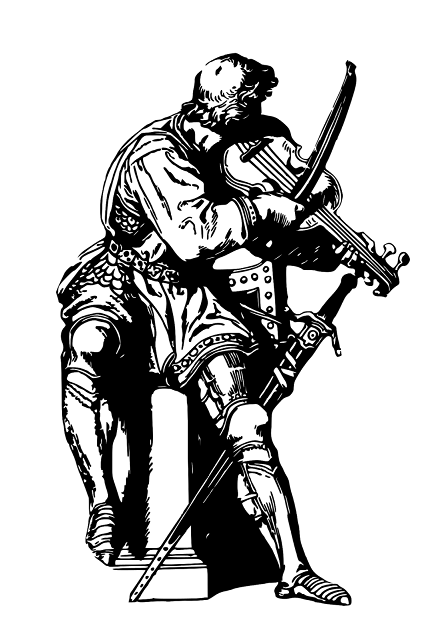 I’ve been a longtime fan of Bards. No, not the Bard from the AD&D 1e Player’s Handbook, but starting with the Bard Class presented in issue #56 of The Dragon. Heck, 10 years ago, I wrote a Swords & Wizardry Bard Class for issue #6 of Knockspell. It wasn’t a bad attempt, but I think I’ve learned a bit more over the years when it comes to game design – and class design. I think its time to refresh the design. ;)

So, what defines a bard in my mind? A bit of a jack-of-all-trades, a bard is a class that is useful, but not meant to replace any other particular core class. It’s the type of class that comes into play when you are playing solo, or in a group that has already covered the four core class types of fighter, cleric, thief and wizard. The bard does a little bit of each class, but certainly not as competently as any of the core does theirs.

A bard is lightly armored. Nothing heavier than chainmail. They can’t wield a shield either.

Weapons are limited to the type that can be wielded in a single hand. Any weapon that would be stored across their back is avoided, so no bows or crossbows. Missile weapons would be limited to slings and thrown weapons.

Hit Dice would be as a thief, as would the Bard’s combat matrix and saving throws.

Bard’s have a song list, much of which would draw from the established cleric and magic-user spell lists. Bard songs are different from the spells they replicate, and bards can not use magic-user or cleric scrolls, even if the spells are on the bard song list. They would also progress slower as casters, with new spell levels at 4th, 7th, and 10th levels

Of course, bards would need the ability to inspire their compatriots as well as distract their foes. Obscure knowledge would also be their forte.

Alright, not quite a complete checklist. Work commences later today. I’ll show peeks at the progress as it happens, and the final design will likely appear in Torchlight #2.