Deal of the Day - Tomes of Cthulhu (CoC) 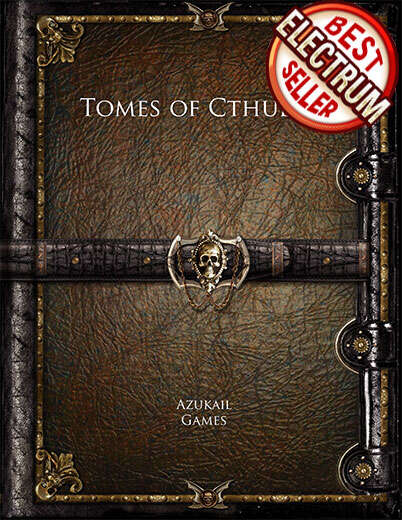 I will admit to being a Call of Cthulhu junkie. I own the old boxed set, the 5e books, the 7e books, and Starter Box, the Horror on the Orient Express box set from the Kickstarter, and simply way too many CoC adventures to count.

Tomes of Cthulhu is today's Deal of the Day. Normally 2.99 is PDF, until tomorrrow morning it is on sale for 1.49.

So, what is Tomes of Cthulhu?

Tomes of Cthulhu is a generic supplement for horror games based on the works of H. P. Lovecraft. It describes in detail 20 different books, plus alternative editions and original sources for some of them, of esoteric and sometimes forbidden knowledge that are a common theme in Lovecraftian horror.

Each book has its name, and author, if known, as well as details on its appearance, when and how it was published, again if known, and what sort of knowledge might be found in it, which includes a Least to Greatest approximation for how much general knowledge, and its effect on the reader's sanity, might be found in a book. The language and physical description of the books are also included.

Some of these books are by genuine historical characters, although the books themselves are not. One book is actually real. The majority were written prior to 1930, at least in the first edition, some many centuries before that, with a spike in English translations in the late 19th century.

To make horror real for your players, you need the right props to set the setting and strike the mood. For a buck and a half, Tomes of Cthulhu looks like it will fill such a role admirably.

Email ThisBlogThis!Share to TwitterShare to FacebookShare to Pinterest
Labels: cthulhu, deal of the day