Goodman Games Acquires Dark Tower from Judges Guild - Where Does This Leave the CSIO Kickstarter Backers? 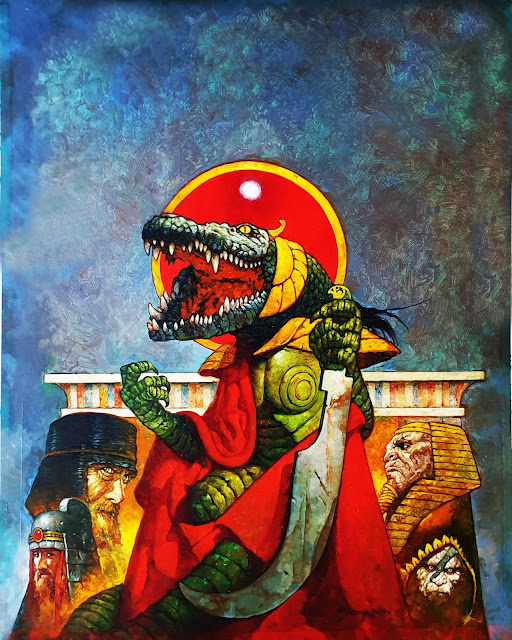 Goodman Games announced over the weekend that they had acquired Dark Tower from Judges Guild. Not the rights to the property, the actual property.

So step back in time with us to 1980 and have a crawl through the only non-TSR module to ever make Dungeon Magazine’s cut as one of ‘the greatest D&D modules of all time:’ Dark Tower. Goodman Games has acquired Dark Tower from the Judges’ Guild, and will republish it in fully converted 5E and DCC RPG editions later this year. Director of Product Development Chris Doyle will lead the conversion to 5E, and original Dark Tower creator Jennell Jaquays will be included in design work on the new edition.

Then there was the Kickstarter announcement from the Judges Guild Deluxe Collector's Edition Vol. 2 in November of 2020.

In lieu of royalties, Judges Guild has agreed to donate a portion of proceeds from the Kickstarter to benefit two special charities, as outlined below.

In lieu of a royalty from the production of this volume of the Deluxe Collector’s Edition, Judges Guild has agreed to donate their royalty to philanthropic causes, and Goodman Games will match that donation. Therefore, a total of 20% of the proceeds from this Kickstarter will be donated to charity. 10% will go to the Anti-Defamation League and 10% to GLAAD.

Those royalties would have amounted to about $8,500 from the Kickstarter. How far would that have gone to making the backers of the City-State of the Invincible Overlord Kickstarter whole?  Probably not far enough, but certainly closer than we are now, and I'm sure the monies could have been accounted for in whatever contract Judges Guild would have had to sign.

So, it begs the question - how much were Bob Bledsaw and Judges Guild paid for the rights to Dark Tower? Is that money being earmarked for the floundering CSIO Kickstarter, or is it going to be spent on hookers and blow - or some other such nonsense?

What changed from "After this final volume, we have no plans to release future Judges Guild titles" to "Goodman Games has acquired Dark Tower from the Judges’ Guild, and will republish it in fully converted 5E and DCC RPG editions later this year" in the course of 10 months? I'm guessing an $85k Kickstarter despite the bad publicity caused a change of heart...