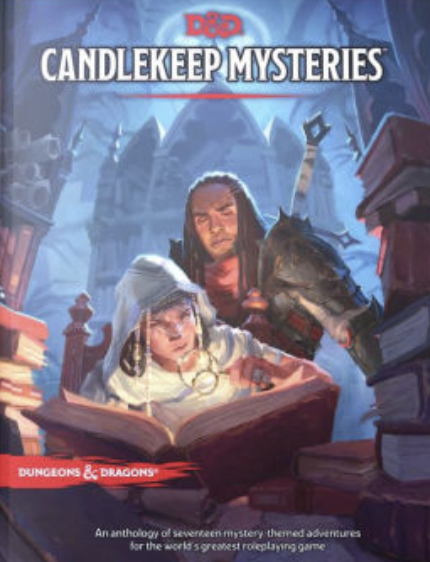 So, I've covered the Candlekeep Mysteries Freelancing Drama on The Tavern's YouTube channel, but I was asked to provide a summary on the blog side of things. Long story short (you can read the long story at BoLS):

WotC decided to do an adventure collection to be written by authors from marginalized segments of society. This is the same collection that had the wheelchair-accessible dungeon.

Graeme Barber, perhaps better known as PoC Gamer, was signed to write one of the adventures in question. As Graeme stated on his blog:

Its form and content had made it through the pitch and drafting process, and I had no reason at the time of submission to suspect that it would be subject to the edits and modifications that went into it. Especially because we (the writers in general) had been hired specifically because we were “fresh voices” and “new perspectives”.

So, what did Graeme submit?

He submitted an adventure with potentially world-changing fluff:

I determined that I wanted to link back to the Days of Thunder and bring the Grippli back, all by building on what had come before and that was current.

This delved deep into Yuan-ti lore specific to the Forgotten Realms, building on the schism implied in the Tomb of Annihilation about Yuan-ti that weren’t evil (or at least weren’t hostile) and just wanted to exist. The idea was that good Yuan-ti were working to hasten the awakening of the World Serpent, the mother goddess of the serpentfolk, by recovering an ancient tome from the crypt in the old temple (from the story in the book). The evil Yuan-ti want to stop them. The Grippli are caught in the crossfire.

The adventure started with finding the book, and there was a list of things the players might be looking for in Candlekeep. They would find the book, and the first part of the mystery was figuring out how to read both stories that were on the three cylinders therein. The stories were legends from the Batrachi Empire, involving the various frogfolk of the Forgotten Realms. This would reveal the temple, and then lead to the characters learning about the Grippli village. Further investigation revealed lore about both the Grippli and the Yuan-ti. The mystery then shifted to investigating what was happening.

The emphasis here was on the ancient nature and unknown materials that things were made of from the Yuan-ti side of things. The sword was a literal fang from the World Serpent, the scale mail made from a giant snake unknown in the modern era. Metal fittings were made of a mysterious copper alloy. The Yuan-ti had more nuance, and the adventure added a mythology and history to them that could open more doors if desired by the DM and players.

The Grippli were presented as having had patron deity return and bring them back up to speed with the gift of literacy in their ancient language; they had art, nothing was primitive; I used the terms simple and utilitarian, and the domed mud brick village was filled with colours and decorations. Their village was a mix of new made buildings and impossibly ancient buildings and edifices that had withstood the test of time.

What was published? The adventure without the fluff:

All references to the Batrachi, World Serpent, Days of Thunder, the tome, or any other motivations were removed. The Yuan-ti were reduced down to just being evil for evil’s sake for the most part (without the cut lore, it makes less sense), the Grippli had their culture stripped out and so on. Colonialist language and imagery around the Grippli was inserted as well, moving them from being simple and utilitarian with obvious culture and technology to being “primitives” who “primitively decorate” their thatched huts with crab bits.

Essentially, where you could see the welds and joins before, you could now see the chop marks and bolts. The story was reduced to a simple rescue mission against unmotivated baddies with confusing parts where bits of the original plot flashed up as absent. This was especially notable in that there was no plotline or reason for anything the Yuan-ti were doing; the conflict between the good and evil Yuan-ti was left completely unexplained until a tidbit at the end of the adventure that, without the cut content, made little sense.

So, Graeme went on Twitter to complain that WotC butchered his work and he wanted his name removed from further printings of Candlekeep Mysteries.

Here's the thing. WotC wanted a short adventure, not world-changing setting material. What Graeme wanted to write is fine for one's home campaign, but a bit too specific for a generic published adventure. His hissy fit in Twitter and his blog simply burned bridges, not just with WotC but likely with other potential publishers.

As a freelancer, you need to stick to the script. If you want to change the world, you need to write your own IP.