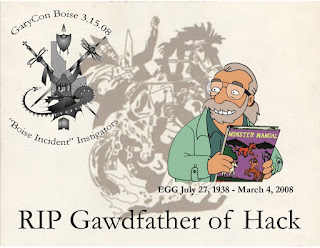 This weekend is GaryCon, though this year it's virtual. Raise a glass and/or roll some dice in remembrance.....you do you.

Earlier in the week I was chatting with a GM friend of mine, mostly getting her advice on a writing project I was (probably still am) a little out of my depth on. Of course the discussion strayed from the initial topic and in the process I was told that she was going to "stop fudging dice rolls".

Now I already know that some of your reading this may have already condemned this GM for her particular style......which is human nature if you have a conflicting style. I've always been a "by the roll" type GM, and player and it's served me well in the past*. Some games you really shouldn't even consider fudging dice rolls, like in DCC where the game balance itself comes from the brutality that is the random dice roll.

Now in this GMs defense, said dice rolls were more like changing a monster's hit point total or under-representing a damage roll to keep from killing a PC. I think most GMs do this as more of a story-telling perspective and to keep the action flowing. Of course I doubt the same type of GM would add hit points to a monster or bump up the damage roll against a PC in order to kill the character because they think the story would be benefitted, which is kind of why I'm against the GM screwing with dice rolls.

Now I can see a different GM fudging dice rolls to the same effect for a vastly different purpose. If I wanted to (well be a dick, but not exactly where I am going....) increase my chances of a Total Party Kill (TPK) or just wanted to hamstring the party in general, I'd fudge the dice obstinately in the "party's favor" to not kill a PC, but bring them down to like 1 hit point. Almost killing a character could be "dramatic", but also is more of a party resource suck than killing said PC. Sure, go ahead and use up your potions and spells to restore that character.......then you won't have them later and I can maybe kill off a few more of the party!

Yes, I'm the Arbiter of the game and have to decide what goes, but I'm telling a story, not necessarily the PC's story. The PCs might be the protagonists, but the way I figure...some of the story has to happen outside of the PCs actions...they just get to see the stuff that comes across their path.

Also, I'm not sure I'm good enough of a GM to properly balance an adventure, much less a campaign well enough to keep the adventure fun for everyone involved. Sure, most games have some rough guidance, but it's well....rough. I'm OK with dead ends, red herrings, and unbalanced encounters and adventures. The rough guidance given can get me "close enough" and my actions in shifting in response to the party isn't so much fudging dice rolls, but changing how the world...how the story...is tweaked in the first place.

Instead of changing a die roll I might add or remove some monsters from an encounter before the party starts the adventure. If they lose a PC halfway through I'm not going to change what they might face should they press on, but if I know that one PC isn't playing I might make that change before play starts for the night.

Having been a HackMaster (4th & 5th Edition) GM I have been guilty of the "Player vs. the GM" dynamic at the table. Of course that was more a role I was playing as I generally root for the PCs, but if they think I'm out to get them....well that's a bit of game-table drama in and of itself. Just one more thing that the players can overcome.....they can get over and "win" against the adventure and again of the GM out to get them. I was a big fan of the GM shield and everything.....

I think out of necessity I had a con game that I didn't have my usual setup so I was forced to play without a GM screen and started rolling out in the open.

Sure I was already a "as the dice falls" type of GM, but really the players would have to just take my word for it. Rolling in the open let me tweak the adversarial relationship just a smidge. Clearly I'm still a "killer GM", but I'm not faking any of it. Instead of thinking about how to balance the game in the moment I do some rough "math" before the game and let the dice help tell the story that the players nudge and I arbitrate. Much easier (i.e. Lazy) for me to manage. Sure this means that the players may push themselves too far and get themselves killed, which is clearly reflected in my kills stickers above.

My players have to trust that I'll put adventures in front of them they can probably manage. Is that really my job? not really.......but in real life we don't usually try to bite off more than we can choose, within reason. Now if the adventure or encounter goes South and the party doesn't react accordingly...their fault, not mine. Trying to manipulate things to make the adventure/encounter equitable is a lot or work...and I'd rather just take the lazy route and deal with the aftermath.

Ok, took a quick break to see if Gary had anything to say about dice rolls in Master of the Game (an aside......holy fuck, this book is going for $70 now!?) Not seeing anything, but there is a bit about Killer GMs (I'm not actually one) and more about GM laziness, which I've more than implied in this post. Yeah...maybe I need to spend less time musing about fudging dice rolls and more reading Gary's thoughts on "Principles and techniques for becoming an expert Role-playing game master".

*I find it hard today to not leave this rambling without a PC story. For a con session I thought it'd be cool to try and roll up a Half-Ogre Fighter specialized in dual-wielding two-handed swords because who doesn't like two 1d12 attacks per round? The adventure was a gladiatorial arena and while I do not remember much from a Sunday morning con game a decade & a half ago, I do remember my PC being pushed off a 120' tower by a wall of force. Since my guy is looking at 12d6p of damage I asked if he could grab a sword in each hand and smile as he faced his impending death. This was HackMaster 4th edition so dice "penetrated", i.e. if you rolled a the top number on a die, you rolled again and added the result -1 to the total. The average damage roll should have been 48hp. Of course, since this is a story being recalled 15ish years later, the GM rolled poorly. Not a single die penetrated, lots of 1's and 2's. Oh and armor absorbed some damage....and Half-Ogres take 1/2 crushing damage, which falls...er, fall....under. Basically my PC managed to survive the fall and walk away from most certain death. Good times.

Posted by Christopher Stogdill at 2:30 PM