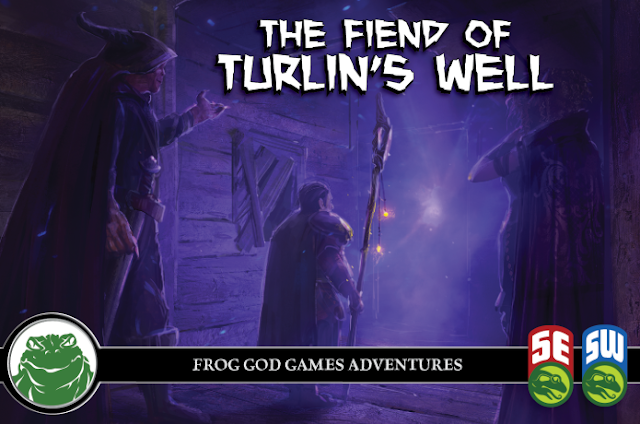 For some reason, every time I read the title of this project, I see "Friend" instead of "Fiend". Then again, I am the same person that types "Time" for "Tim" almost all of the time, so maybe it's me ;)

The Fiend of Turlin's Well is billed as a "psychological horror adventure in a sword & sorcery setting, for 5e D&D and Swords & Wizardry." Its the first Necromancer Games/Frog God Games adventure that has come with a warning to the best of my knowledge:

A Quick Content-Warning On This One: The Fiend of Turlin’s Well is a psychological horror adventure in a swords & sorcery setting. It contains numerous gory descriptions and situations that go beyond the ordinary style of swords & sorcery fiction and are more what one would expect in horror fiction. There is a dark element in most sword & sorcery fiction, which we embrace as a part of that literary genre, but The Fiend of Turlin’s Well unquestionably crosses over from the swords & sorcery approach of “dark-by-implication” into the horror genre of “look-into-the-dark.” Many of our fans have asked for adventures like this one, but by the same token we don’t want to surprise or ambush fans who expect a pure swords & sorcery genre adventure. If you’re interested so far, then by all means, please read on …

The Fiend of Turlin’s Well seems like an ordinary city adventure at the beginning, set in the Turlin’s Well District of the City of Bard’s Gate, but gets darker and stranger as events move on. An unknown troublemaker is progressing from vandalism to kidnapping to murder, and the district’s civil order starts to come unraveled as the city watch remains helpless to stop the very visible crimes. The adventure is for introductory-level characters (level 1-2), but the players should be experienced; the courses of action aren't obvious enough for beginning players.

Spoiler Alert: For the GM Only

Torad Yarog, the Fiend, is not only a doppelganger with multiple personalities, he is also the captain of an inter-dimensional ship and a favored cultist of the Demon-Princess Teratashia, Mistress of the Gaps between realities. Hunting him down leads the characters to an old manor house in the city filled with gruesome evidence of the Fiend’s crimes, and clues that allow them to pursue the truth onward to the Death-Ship of the Roach Princess (soon to be released via Indiegogo).

No Pathfinder version with this one, but if you are a Patreon backer of the author he has permission to do conversion notes. Note, you'd still need a copy of the adventure.