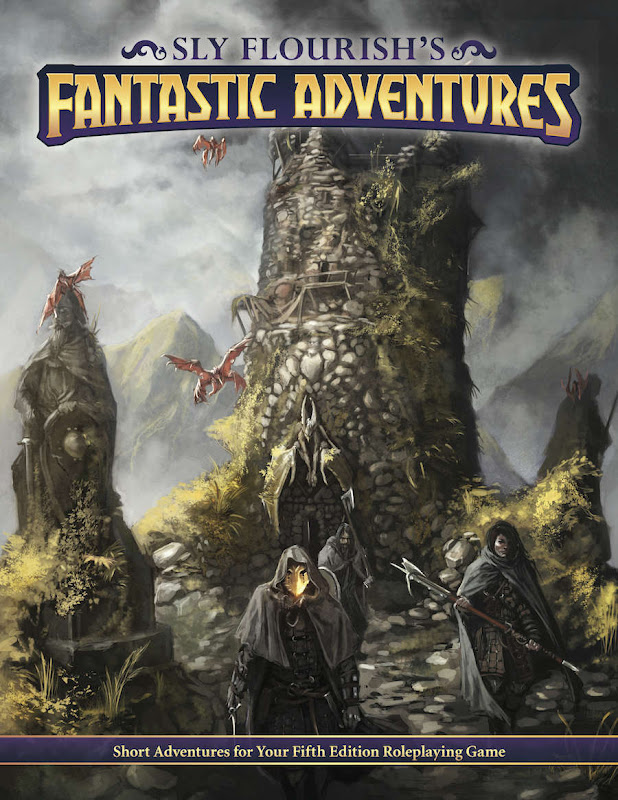 I may have my feet solidly in the OSR, but even I have heard good things about Sly Flourish and their various releases. Today's Deal of the Day is Sly Flourish's Fantastic Adventures. Inside you get 10 short adventures for D&D 5e, but I suspect, as they are lower-level adventures, you can convert to the OSR system of your choice with little effort.

Sly Flourish's Fantastic Adventures is a book of ten short adventures for the fifth edition of the world's most popular roleplaying game.

Each adventure is written for 2nd to 5th level and is designed so GMs can drop them into any fantasy campaign world. Whether you run a homebrew setting or a published game world, these adventures will fit in as either main adventure hooks or side quests to be undertaken by the characters in your game.

The Night Blade: Ralavaz the Night Blade, a notorious bandit chieftain, has been released from prison. Rumors mark him as having returned to the hideout from which he and his band once operated—a ruined watchtower where a new group of bandits now dwells. The local sheriff believes that Ralavaz’s return means the Night Blades are back—and that the bandit chieftain must be stopped for good.

The Dwarven Vault: Miners digging on Goldpeak Mountain recently broke into an ancient dwarven vault lost for centuries, and from which treasure and madness now flow. Monstrous attacks in the local area see the adventurers asked to investigate, leading them to the mines and the discovery of the ancient magic underlying the threat.

The Well of the Black Sun: The mine known as Deepfathom Well is the only source of the lucrative alchemical substance voidwater. However, a number of recent murders—including the immolation of a head miner—have closed the operation, and the mine’s owner hires the characters to investigate. As they explore the mysteries buried deep beneath the ground, the characters discover the dark power lurking within the mine—and expose the activities of a secret cult that seeks to control that power.

Rosethorn: A particularly intelligent goblin named Rosethorn has brought the local goblin tribes under his control, and is leading them in devastating raids against trade wagons and farm folk. When the local sheriff seeks help to put an end to these dastardly robberies, the characters uncover multiple levels of mystery and subterfuge, and discover the secret behind Rosethorn’s villainous mind.

The Gleam in the King’s Eye: Lord Marlin Whitesparrow hires the characters to join him as he explores the lost chambers beneath his ancient keep. His goal is to claim the Crown of the First Lord—a lost family relic that might help solidify his rule. But within the forgotten spaces beneath the keep, Whitesparrow and the characters will discover family histories that should have been left alone.

The Crashed Palace: When a celestial palace falls to earth, its destruction unleashes corrupting magic and a bearded devil intent on summoning its master—a powerful pit fiend from the hellish plane of Dyn. A mortally wounded archon begs the characters to travel to the palace and prevent the summoning of this fiend, but dark magic and monstrous creatures transformed by the devil’s rituals stand in their way.

The Flesh Eaters: Lizardfolk tribes living near settled lands traditionally keep to themselves. So when a lizardfolk attack leaves local settlers dead, the characters are asked to investigate. After discovering that an ancient lizardfolk cult is responsible, the characters must track the cannibal cultists back to their lair, revealing the dark magic that has corrupted the lizardfolk, and standing against their powerful leader.

The Queen of Red Water: At an old dwarven dam, a bugbear matriarch has found the key to holding an entire valley hostage by stopping the flow of the local river. With farms on the verge of collapse from the sudden drought, the characters are charged with negotiating with the bugbear’s agents on behalf of the local village. They must then infiltrate the dam to identify the full scope of the bugbear chieftain’s threats.

The Cult of Dusk: A deadly attack in the local village leads to the revelation that a dark cult is seeking forbidden magic in the nearby ruins known as the forgotten library. The characters must pursue the cultists and their mysterious leader into the ruins, trying to prevent a ritual that might pull the world into eternal night.

Gloom: Lord Whitesparrow’s spoiled nephew and heir, Pennin, is marked for death, and the characters are tasked with discovering who is behind the threat. Even as they learn that Pennin recently desecrated a local temple, murder and mayhem lead the characters to discover that one of the temple’s priests is a former assassin of great and terrible renown—and that she has kidnapped Pennin to seek bloody revenge.

Each adventure includes a map of the adventure location and a special presentation format designed to make it as easy as possible for game masters to pick up this book, choose an adventure, and get started playing. Whether you're running a single-session adventure for a few friends or want to drop a short adventure into the middle of your longer campaign, Fantastic Adventures has you covered.

The electronic version includes both PDFs and Epub, perfect for running off of your phone or tablet along with pregenerated character sheets for levels 1 to 5 custom built for Fantastic Adventures.

Above you will find affiliate links. Affiliate links are the life's blood of The Tavern and a simple and effective way to support The Tavern doing what you already do, which is buy gaming material ;)

Email ThisBlogThis!Share to TwitterShare to FacebookShare to Pinterest
Labels: 5e, deal of the day, DnD5e