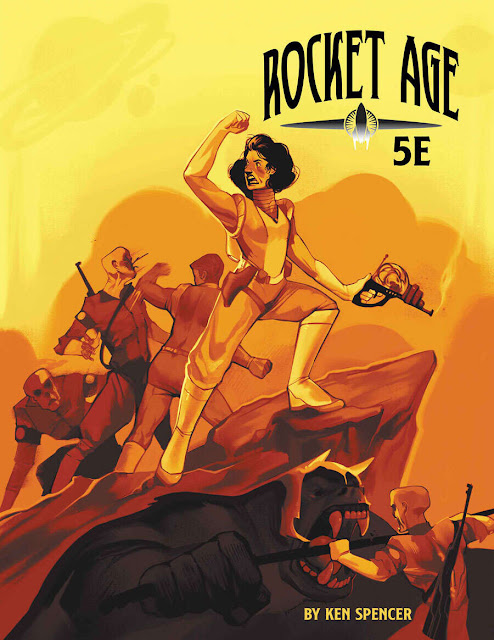 I'm a huge fan of pulp-era sci-fi serials. Flash Gordon was cheese, but it was good cheese. Putting such into a 5e powered RPG ruleset may actually tempt me into learning the 5e rules well enough to run a few sessions.

The Rocket Age 5e Core Rulebook is normally 19.99 but until tomorrow morning its on sale for 9.99.

"It's alternate history pulpy retro-sci-fi space opera planetary romance. It's throttled up rocket packs burning radium on the long blast to the farthest reaches of the Solar System. It's hunting thunder lizards in the upland jungles of Venus. It's battling Ancient Martian killing machines piloted by the Deutsche Marskorps across the baking red deserts of Mars. It's exploring the deadly skies of Jupiter under the constant threat of Europan disintegration. It's RAY gun wielding heroes bulls-eyeing mutants in the blasted ruins of Io" - Ken Spencer, Rocket Age Author.

Rocket Age is the core rulebook in our new radium-powered game line of interplanetary adventure! 5e compatible, it's packed to the fins with all the rules, setting information and game ideas to keep you playing throughout your very own rocket age!

Email ThisBlogThis!Share to TwitterShare to FacebookShare to Pinterest
Labels: deal of the day, DnD5e