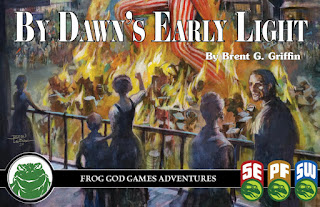 I’ve been enjoying the Frog God holiday themed releases. They are very readable and playable, which seems to be a rare combination. By Dawn’s Early Night is their latest, obviously themed for July 4th.


It is midsummer, and the remote mountain village of Ilgaardd is preparing to throw an epic celebration to honor the anniversary of its independence from the tyrannical rule of Killoran the Red. While most of the villagers are happy with the new leadership and are excited about the prospect of hosting a major event, droves of raucous outsiders, bitter loyalists, and an unprecedented heat wave are causing tensions to mount.  You have been hired by the local sheriff to keep the peace. To do your job, you will have to contend with rowdy villagers at each other’s throats and a towering force on the cusp of raising its haunted form high above the Village Green!

Inspired by (dangerous!) early American traditions of lighting bonfires to celebrate Independence Day, the characters are the only hope that Illgaardd will remain standing by dawn’s early light.

The characters are hired by Jax Blueskin, chief constable of the remote village of Ilgaardd, to keep the peace during the village’s Independence Day celebration. The characters must contend with increasingly rowdy villagers only to discover a nefarious plot devised by Killoran the Red, the village’s presumed-to-be-dead former ruler. If not stopped, this plot will unleash a force so terrible that the village — and possibly the region — may be utterly destroyed. By Dawn’s Early Light is a short adventure for 4–6 low-level characters.
We are on schedule to deliver the PDF by July 4th to light up your Independence Day!