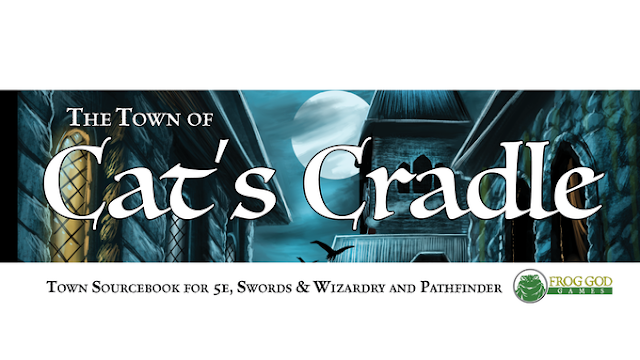 This is one of the reasons I am very happy to be associated with Frog God Games:

PPA Loan and COVID-19  We’re using the proceeds of a PPA loan to employ our writers and artists on an immediate basis, which lets us keep paying them at normal levels despite a bad market. For this reason, we’re following the unusual procedure of offering a Kickstarter before the work itself is completed. The books will be printed at the Arizona printshop we use for Indiegogo projects rather than in China, which allows us a much faster turnaround to backers. Most of the initial legwork has already been done, and the project should be almost completed by the time the Kickstarter ends, with the exception of layout and some of the art orders. To the extent the Kickstarter generates any profit — which isn’t guaranteed in this market — we will continue turning the profit around to new projects, to generate as steady a stream of work-flow as we can.

That is good looking out.

So, what is the Cat's Cradle Kickstarter?


Cat’s Cradle stands at the intersection of a caravan and river route, which brings in mysterious travelers, unscrupulous grifters, and -- quite often -- dangerous villains. The Kickstarter includes a town sourcebook for Cat's Cradle, the adventure Eye of Itral, and Fortune Hunters, a book of town-oriented NPCs.