Not Erik Storytime: The Time I Won a Four Hour Tournament in Under Ten Minutes 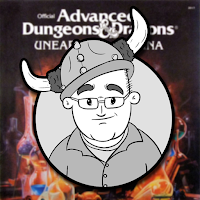 So far here at the Tavern I've talked a LOT about tournaments, mostly because I have a lot of experience with them. Playing, writing, organizing, etc. One of the things I liked about tournaments, especially HackMaster tournaments, is that they were both competitive and cooperative. You really have to cooperate with your teammates and your party is competing against the parties at the other tables. If it was a single round adventure even better because there really weren't any losers. You got to play and have fun. If you were playing one of your home PCs and he/she/it died, that kind of sucked, but that's a good thing, right?

Seriously, and I don't know why more people don't instinctively get this, but you should get a little upset if your PC dies and that is a good thing because that means you cared and were invested. Nothing ventured, nothing gained......

...anyway I'm at this low-level, pretty sure it was a 1st level only, tournament game running my Double-Specialist Invoker. I'm not going to go all fanboy nerd and talk about my awesome PC because those details don't matter to this story and I'm not really that kind of loser trying to bore a captive audience with a PC stor.....oh shit, I guess I am that kind of loser. Screw it...in for a penny....

...ok, back to the tournament. This was actually the second tournament for this PC, I just hadn't played this guy in a single home game yet so he was just shy of the experience required for second level. For the most part my PC was on the same level as the others that were rolled up just prior to the adventure.....well technically we were on the same level, but my guy had that other adventure under his belt.

The GM starts reading us the set-up into flavor text for the adventure and I start to get a bit worried because I'm sure I've heard this before.....I think I've played this adventure before so I can't play it again per the normal tournament rules. I inform the GM and luckily he tells me it's ok because this is actually a new adventure based on an older one and after the initial flavor text it's all going to change. Sure enough the next paragraph is new and the setup for this adventure is that a local farmer hasn't been heard from in days and we're sent, by the local Sheriff, to specifically find the farmer and protect his property (It was assumed he and his farm were in danger).

The party makes its way to the farm a bit out of town and find the farmer in his home pretty much scared shitless. Evidently some "monster" got into his barn earlier in the week and he just boarded everything up and hid out in the house. He hasn't gone out to check on all his animals in the barn in three or four days......he agrees to come outside to the barn and I ask the fighters to remove the bar as I toss in a small fireball.

Of course the farmer just loses his shit because we're going to set fire to his barn and all his precious animals. Seriously?! You haven't feed any animals in days and shut them up with an unknown monster? Yeah, the animals are effing toast already dude, quite your bitchin.

I ask the farmer how much the animals are worth. As he hems and haws I up the question to the barn, and then just how much for the whole damned farm? The GM, assuming that all the players are running fresh PCs on their 1st adventure, spits out a figure from the farmer of 600 Gold Pieces , which should be more than what the entire party can scrap together.....

"SOLD! Do you want that in gems or gold coins?" Unlike the other PCs I have loot from the 1st tournament, in the form of coins and 100gp pearls.....

The party escorts the farmer back to the town to be dropped of with the Sheriff. My PC hands over a small pouch of pearls. We're not even 10' into this four hour tournament and I get an inordinate amount of pleasure in informing the GM that we just won the tournament: all objectives met, no PC deaths, three hours and fifty minutes early......the task at hand was to find the farmer and save/secure his property. His property was safely in not only his hands, but the hands of the Sheriff.

Now if the rest of the party wants to come back to my farm and help me with a little pest problem.......

....and that is the story how my 1st level DS Invoker won a tournament in less that 10' by buying the farm.
Posted by Christopher Stogdill at 12:32 AM

Email ThisBlogThis!Share to TwitterShare to FacebookShare to Pinterest
Labels: not Erik, Storytime, tournament