Imagine my surprise when I opened up the DriveThruRPG page to find that Gaming Ballistic had released some The Fantasy Trip adventures.

I knew that Douglas Cole, the man behind Gaming Ballistic had intentions to do so, but I had no idea they were being released so soon. The titles are:

Curse of the Pirate King (by Christopher R. Rice and J. Edward Tremlett) 3.99 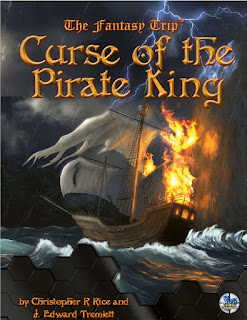 The expedition seems simple: travel to the former capitol of a vast pirate nation, and find the fabled Blade of Dawn. This “straight-forward” mission is complicated by several factors:

All the party has to do is go to the lifeless rock, and loot the treasure of a thousand dead buccaneers. What could go wrong? This quest follows the events of Crown of Eternity with that powerful organization now working against the players.

The last page of the adventure contains 42 print-them-yourself tokens for monsters and NPCs that appear in the adventure (in black-and-white). 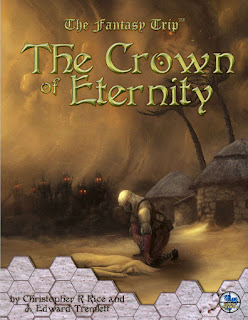 The party is tasked with finding a lost researcher for an exclusive league of magical explorers. The lost eldritch archaeologist was in search of the fabled Crown of Eternity.

This is a quest adventure, with the following goals:
This is a patronage quest, and introduces the Indhyna League, a mysterious and well-funded group of treasure-seeking mages and scholars. They very much have their own agenda.

The last page of the adventure contains 42 print-them-yourself tokens for monsters and NPCs that appear in the adventure (in black-and-white).


You are Belladonna, the young maid and cook at Castle Ironskull—moonlighting as a 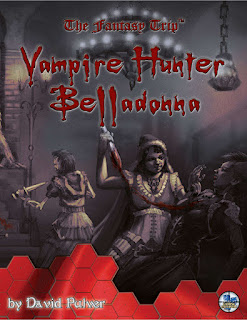 Years ago, the sinister Lord Adrik Blackbird turned your best friend into a vampire. For their own good, you had to stake them both! Somehow, you succeeded—but while those vampires perished, they had already infected others. The bloodsuckers will spread like a plague through the local countryside—unless you hunt them down!

Play as the lethal maid Belladonna (wielder of silver stakes and deadly poisons), or as your own vampire slaying hero or wizard. Travel through the villages and wilderness near Ironskull Castle, hunting vampires (and possibly other monsters). During your quest, you may uncover disturbing rumors of the rise of a new and terrifying master vampire, and the arcane relic they seek. Can you find it first?

Vampire Hunter Belladonna is a programmed adventure for The Fantasy Trip. You won't need a Game Master—instead a system of branching paragraphs directs you from encounter to encounter as you make your own choice. You resolve combat or other encounters using the TFT rules.

In this double-sized 32-page adventure, you will find:

Over 200 paragraphs detailing wilderness and village encounters.
VAMPIRE HUNTER BELLADONNA is an independent adventure, but it has ties to IRONSKULL CASTLE, so you can use both together in a campaign if you wish. If you think of it as "Vampire Hunter B," we won't mind that either.

The adventure is also available as an offset-print, saddle-stitched softcover printed on 85#/128gsm paper through the Gaming Ballistic website.

I may just be inspired to run some TFT in the New Year. :)

Yes, those are affiliate links above. Affiliate links keep the taps flowing and the heat on at The Tavern. I thank you in advance.
Posted by Tenkar at 9:25 PM