Dungeons & Dragons Movie to Focus on the Eye of Vecna, Will Feature a Forgotten Realms Character (Comicbook.com) 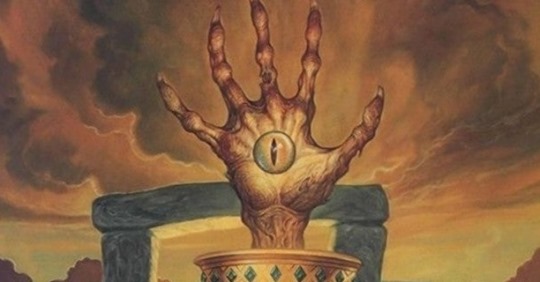 Comicbook.com shared an article about the upcoming Dungeons & Dragons movie (due Summer of 2021) - Thanks to Luke Gygax for sharing the article on Facebook

The upcoming Dungeons & Dragons movie will feature at least one character with ties to the Forgotten Realms and will focus on a quest for an iconic magical object. ComicBook.com can exclusively report that the upcoming Dungeons & Dragons movie currently in development by Paramount will focus on a group of adventurers looking for the Eye of Vecna, a powerful artifact that dates back to the earliest days of the game. Vecna is a powerful lich turned god whose hand and eye (remnants from when Vecna was a mortal) grant unspeakable power. Both the Hand and Eye of Vecna come with a terrible cost - in order to use either artifact, the user must remove their existing eye or hand and then replace it with the artifact.

Additionally, ComicBook.com can exclusively report that Paramount was looking for a male actor to voice the dragon Palarandusk, a dragon that lives in the Forgotten Realms. Palarandusk hasn't played any major roles in any D&D adventures, but the dragon was named in several Dungeons & Dragons sourcebooks as a protector of the village Ieirithymbul who concealed his true identity as a gold dragon. While Palarndusk's involvement in the Dungeons & Dragons movie indicates the movie will take place in the Forgotten Realms, our source indicates that the dragon will act as an ancient leader of a group of Triadic Knights. In D&D lore, Triadic Knights are followers of the gods Ilmater, Torm and Tyr.

Our source indicates that Dungeons & Dragons will feature a group of adventurers led by Raven Hightower, a warrior with a magic flamesword that's haunted by his sister's death. Other characters include the "half-dragon" Hack Karroway, the gnome thief Olivan Trickfoot, and a masked warrior named Alyssa Steelsong who is set to take over Palarandusk's role when the dragon dies. Additionally, the main villain of the movie is a male drow named Razer Horlbar who once kept Raven and his sister as slaves, along with a female tiefling named Damala and a brutish warrior known only as "The Beast."

You can read the rest of the article here.

Happy Thanksgiving everyone!
Posted by Tenkar at 11:59 AM