I mentioned this on the Tavern Chat podcast last night, but I figured it was a big enough deal to repeat here. DriveThruRPG is offering a limited selection of PDFs specially formatted for use on smartphones and two of those Phone formatted PDFs are available for free (or at least PWYW).

Dogs have inherited the world, building the kingdom of Pugmire untold centuries after the Ages of Man are over. These dogs have been uplifted to use tools and language, and they seek to rediscover the ruins of the Old Ones. Some have learned to use the leftover technology of humanity, but they believe it to be magic handed to them by their lost gods. Others seek to create an ideal civilization, using a Code of Man compiled from ancient, fragmentary lore left behind by humanity. The world is dangerous and mysterious, but good dogs will persevere.

Some highlights of Pugmire include:


Will you be a good dog? 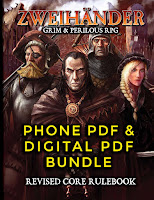 WELCOME TO GRIM & PERILOUS GAMING Winner of the ENnie gold Best Game and Product of the Year at Gen Con 2018, featured on Forbes, ranked one of the best-selling fantasy tabletop role-playing games at DriveThruRPG and having moved over 90,000 copies worldwide, ZWEIHÄNDER Grim & Perilous RPG is a bloodier, grimmer and grittier version of classical tabletop role-playing games. This revised PDF edition is published in celebration with Andrews McMeel Publishing, and features a refreshed layout, new artwork, rules clarifications, color plates by Dejan Mandic and errata. ZWEIHÄNDER Grim & Perilous RPG is a game where your characters will:

Yep, those are affiliate links above. Affiliate links keep the lights on and the taps flowing at The Tavern.
Posted by Tenkar at 10:15 PM