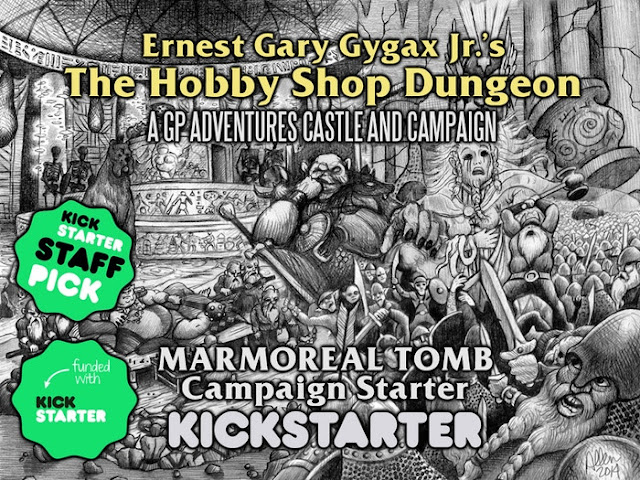 Kickstarter has changed over the years. What was considered acceptable project preparation at the time Far West kickstarted in 2011 (ideas and dreams over a written project before launch) is no longer acceptable by the Kickstarter Community. Ernest Gary Gygax Jr.'s Marmoreal Tomb Campaign Starter Kickstarter (hereafter referred to as the Marmoreal Tomb) fell into the "ideas and dreams" when it launched and by many measurements, hasn't progressed much over the few years.

The Marmoreal Tomb funded on September 2, 2015. It was expected to ship in March of 2016. It basically had 7 months after funding to complete, print and ship. Not by any stretch of the imagination was it a realistic turnaround for a project that was not written when the project launched.

As a side note, right after this funded, in November of 2015, Gail Gygax offered me dirt on The Marmoreal Tomb and I declined to receive it, suspecting it was offered to encourage me to cease digging into the GMF. Heh. I probably should have listened ;)

Let's look at stretch goals. 31 stretch goals were hit. Additional content was offered, as was an in print GM screen. Not just time sinks here, but money sinks too.

How about the funding? 1284 backers for a total of $126,109 USC. The average backer is in for $98.22. Of that total, approximately 15% goes to payment processing and Kickstarter itself. So, about $107k was left before taxes. My understanding is taxes are paid the year money comes in and there were little of any expenses up front to offset the income. We'll lowball and say 15% for taxes leaving the LLC with approximately $91k, which is roughly the amount I saw on the bank statement that Ernie showed me at Gary Con in 2017. According to Ernie's latest update "the funds... sit at about 78K now (lots of art and other original business expenses, as well as an expensive worthless accountant to start with)."

Remember, the number you see on Kickstarter after funding completes is not what the creator walks away with.

Now let's look at how the Marmoreal Tomb updates. Simply put, it's poorly updated. But why, you might say, as Benoist is often posting about it on Facebook? Simply because the method of updating backers is expected to be on Kickstarter, according to Kickstarter's own terms.


Throughout your project, you’ll be communicating with backers and keeping them informed of your progress. Project updates, your spotlight page, Kickstarter Live, and our messaging system will help you keep backers in the loop.

Facebook is not the proper venue to post project updates at the exclusion of Kickstarter itself. Not all of your backers will be on Facebook and many of those that are will not know to look there. If I can point out one of the larger failures of this project, its lack of proper communication with backers, who on average, invested 100 bucks each to see this project come to life.

Then there was the latest update made via Kickstarter. I've read comments that it is tone deaf. I simply find it disrespectful to the backers on a whole.

I'll repost it below:


No Amount of Outside Energy Will Speed This Up

As of this time the whole project status is waiting for Benoist to complete the writing of the creations we generated together. Then he will pass them on to me and days later we will on video chat finish cleaning the material up. He has no desire to hear or see any comments on the KS page since it fires him up to defend the LATE status instead of working on it at all. He is a finicky artist and will not release parts of anything until it is completed.

He does not have access to the funds and they sit at about 78K now (lots of art and other original business expenses, as well as an expensive worthless accountant to start with). As soon as the project fulfills I will be closing down the LLC and Ben somehow wishes to keep a company somehow, I do not.

I playtested the Marmoreal Tomb on three of the four games I ran at Gary Con XI and I will be running some more games at NTRPG con in June. I don't have the finished level 2 or the level 3 Caves of Chaos although some of the monsters and ideas I generated for them are lots of fun and Mark Allen has a fantastic bit of art on my favorite creature of Chaos.

I don't respond to these statements for the same reason I don't get into blogs and all that. If you want to talk to me about something send me a facebook message: Ernest Gary Gygax Jr

In summary - we won't communicate via Kickstarter because we don't like negative feedback on our lateness. On Facebook we can control negative feedback. Ben has to finish writing (and mapping) the ideas we brainstormed together. Levels 2 and 3 aren't complete yet.

Yeah, the attitude is piss poor in that update. But hey, first update since July of 2018.

I think what we have is two individuals that went into this project we excitement and ideas and very little practical knowledge of the amount of work that would go into a project of this size (because stretch goals did not help). Did I mention the increased cost to ship the completed project to backers which is now three years late? Yeah, that will be another bite in the ass.

Little if anything was written at launch. Unrealistic estimated shipping date. A rabbit hole full of stretch goals. This should have had warning signs on it from the start.

I suspect it will fulfill to some extent at some point. We are not dealing with Ken or Gareth. We have two individuals that had good intentions, unrealistic expectations, and a very poor ability to contain an ever-expanding project. We don't need perfection as consumers, we need a completed project that comes close in value to what we backed for. Hopefully, we get there, sooner than later.