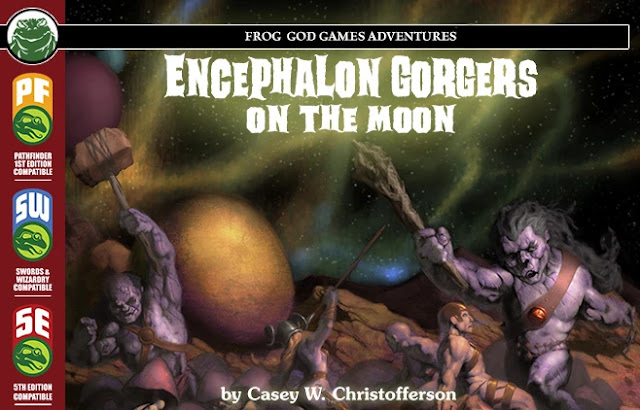 Its time for another Frog God Games softcover release, this time penned by none other than Casey Christofferson . Encephalon Gorgers on the Moon. Yeah, I had to look up "encephalon" - it means "brain". Damn you and your SAT words, Casey!


The Forest of Night has always been a strange place. The trees are far too tall and far too thick here. So full in fact that they block out the very sun leaving the entire forest in the perpetual murk of night. Even the bravest and most experienced of hunters shy away the forest’s higher paths. Far too dark they say, and far too easy to become lost on the winding trails of the primeval wood.

Recently the folk who live upon the slopes of the mountain have complained of strange occurrences, especially around the time of the full moon. Weird shrieks have been heard in the trees. Small creatures acting strangely and deer stumbling into the meadows below the mountain with their brains leaking from their ears.

The locals have turned on one another. Some suspect witch-craft. Others believe an ancient curse has returned to the land centered on hidden ruins thought to be located on the high slopes of Midnight Mountain. Is it a plague? Are the rumor of a curse true? Have demented beings from Sybil descended on the denizens of Hurrie Inn? What’s the deal with all the cats?

One thing is certain. It is going to take a brave band of adventurers to unlock the secrets of Midnight Mountain and perhaps save the land from the depredation of the Encephalon Gorgers on the Moon!


Encephalon Gorgers on the Moon by Casey Christofferson- available in Fifth Edition, Pathfinder or Swords & Wizardry versions is an adventure for mid-level characters. We expect this will be the only  time we offer the premium softcover option for sale.

Within its covers (or the digital PDF file) you will find: 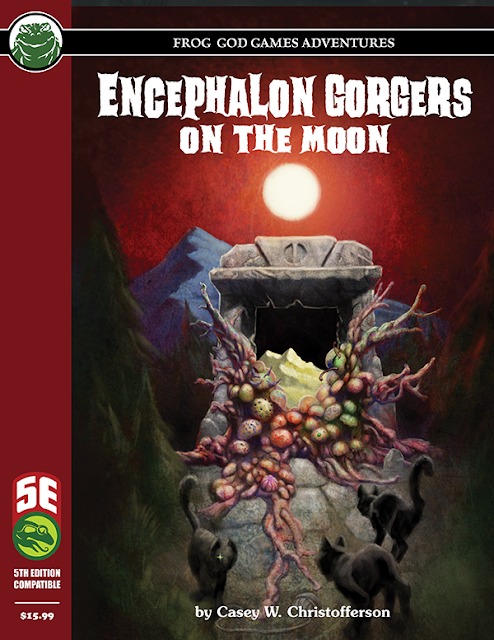