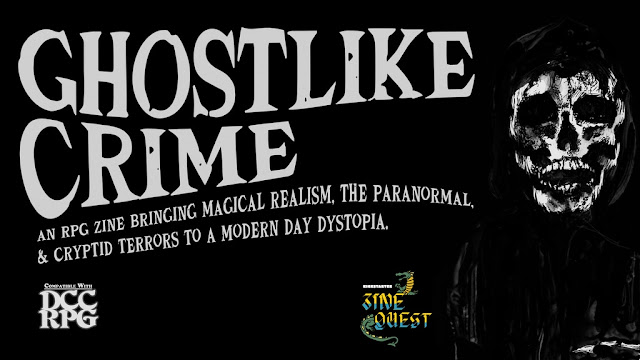 Another zine for Zine Quest - Ghostlike Crime: An RPG Zine of Modern Weirdness.


Ghostlike Crime is a tabletop role-playing game zine bringing magical realism, the paranormal, and cryptid terrors to a modern day dystopia using Dungeon Crawl Classics rules. It expands and hacks the original rule set to place it in a familiar yet darkly skewed setting. The intention is not to unnecessarily complicate the rules or bore you with voluminous background fluff, but to hand the players some quirky character options and throw them into conflict with things that go bump in the night. Imagine the Alpha-team facing off against a family of yeti or Ghosthunters trying to figure out how to keep the local for-profit coroner from continuing to resurrect a mass murdering slasher.

The adventurers are monster hunters and defenders of humanity from paranormal threats. They are not a part of any government program, but an autonomous and clandestine group that also works to keep power out of the hands of oppressors. They are the nail that sticks up. This parallel reality is a dystopia where magic exists, but open practitioners are unheard of. Wealth hoards power and these usurpers who cannot wield it enslave those who do. Ghostlike Crime is set up to be as grim or gonzo as you like.