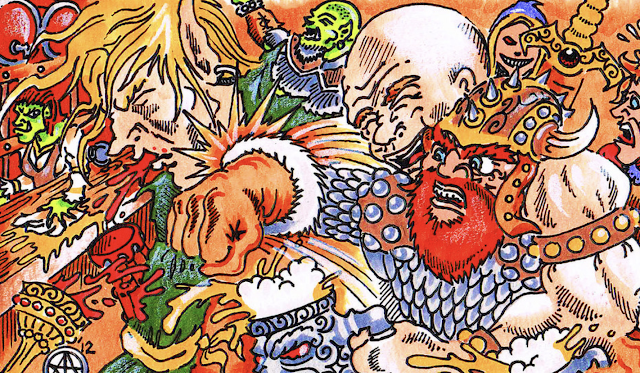 Wow. And here I thought I could rant. Normally, I'd leave this be but there are so many outright lies here I need to address it. More details will be in the Podcast Episode, but my commentary should suffice for some.

First, some background. I first came across Stacy when she was organizing Contessa as an online convention. I remember her complaining that she couldn't get enough female GMs to fill the slots needed to be filled. I pointed out that when you ONLY will accept women as GMs, you are probably excluding 80%+ of the gaming public, maybe even a higher percentage of GMs. I also wasn't comfortable knowing that all sessions were being recorded on Google Hangouts for a lifetime of viewing on Youtube. Yes, I criticized her and her project. Its been all downhill from there.

In the summer of 2015, she went online and criticized NTRPG Con for both the "serving wenches" and the fact that Merle Rasmussen ran an "all ladies" game. A game he ran with his wife in the room. I know, Rach played in it. Stacy then lobbed stones at Rach and I. Here's the post and here's the screenshot: 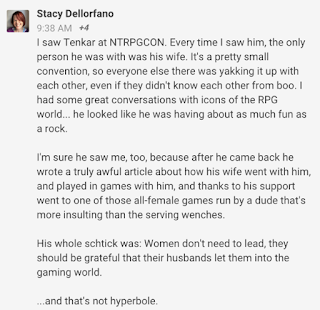 Apparently, I should spend less time with my wife. Sigh. Stacy was upset that I responded to her G plus thread because it was private and I basically had no right to even read it.

Did I mention that Rach is legally blind? That would make her a "marginalized" person according to Stacy.


This to me was the point where I realized there was something special going on.

If you're friends with Erik Tenkar, please don't be friends with me. If you're interested in keeping women in RPGs safe, please don't be friends with Erik Tenkar. (THIS. WTF does this imply? EVERY con I've gone to I've gone with Rach except my first Gary Con, and that was last minute) Erik Tenkar only cares about one thing: Erik Tenkar. (How many fundraisers have I offered matching monies for from The Tavern?) He has been following me around the internet in super creepy style since ConTessa began.  (I've given the background above. I'm not the one ranting on a monthly basis to have someone unfriended and complaining about him. Last time you came up in The Tavern was in October of 2017 - https://www.tenkarstavern.com/2017/10/gamer-in-need-stacy-dellorfano-cancer.html)

WHEN ConTessa began, he spread lies that we thought all white males were potential creepers, and immediately distrusted them. (All sessions were on Google Hangouts Live in 2014 and put up on Youtube. I felt uncomfortable putting myself on YouTube, in a game session with strangers, for all time. It was a measure used to ensure the safety of the women. Here's my quote: "The assumption that male players are bound to include their share of "creepy guys" and "that's why we have to record everything" creeps me out...") While that is now actually TRUE, it wasn't at the time, and it's people like Erik Tenkar who've made that true. (Crock of shit. Give examples.) Sorry dudes, you don't police your own, that's what happens.

At the time, when I corrected him, he ignored me, and continued to spread lies about ConTessa. (Did you then, and have you in the recent past, struggled to fill Contessa GM seats? Not a lie. But please, list the lies I spread about Contessa. Wait, recording sessions were done for what reason exactly?)

All four of my Contessa posts. http://www.tenkarstavern.com/search?q=contessa

The post from 2014 that Stacy is still fuming over: http://www.tenkarstavern.com/2014/02/if-you-have-con-and-no-one-shows-did-it.html

He writes a vague blog post or podcast EVERY TIME I mention him outside my walled garden.  (link them please, because I'd like to see them myself. Because you mention me an awful lot, and I do have other stuff to post about) When I was diagnosed with cancer, he grossly and inappropriately used it to promote his own work (I offered to raise at least 50 bucks from the proceeds of the sales of SWCL. I was to make no money off of it. A third party on your behalf demanded I rescind the offer and I did. If I was out of place with my offer, its because I am a cancer survivor myself and I acted on emotional impulse, without malice.) He never asked me if that was okay, he never apologized for all the times he treated me like shit (and you've never apologized to me nor Rach for the insults you threw at us. What exactly is your point?), he just put it up complete with backhanded compliments.
I sat at my keyboard, ugly sobbing, trying to get friends to go talk to him because I refuse to talk to the asshole. He refused to take the post down, but kept the money when it got to him I didn't want it, and added a snarky edit to the post. But he left the post up, completely fucking missing the point.

(You are missing the point. I've never deleted a post. Ever. The internet never forgets. I don't hide anything, even my mistakes. As for never sending you the money, your third party told me you didn't want it and then BLOCKED me from responding or explaining. So, at that point, what do I do? You didn't want it. You can't have it both ways)

His current method of harassment is to talk about me boldly on his podcast, claiming I have so much power over the people of the OSR (a community I've repeatedly stated I want nothing to do with anymore) that I function as the "thought police", and my asking people to not be friends with me if they are friends with my harassers is somehow controlling a community I can't even stand.
Erik Tenkar is such a coward, however, that he refused to name me in his podcast and redacted my name and likeness from the screenshots he took of me saying this very same thing to other people on one of the posts about Darrick Dishaw AKA Venger Satanis. (Yep, I didn't mention you because quite frankly it was more of a community learning moment. But here, now you are mentioned)

Erik Tenkar seems to believe I shouldn't be allowed to decide what content from whom I wish to see in my feed.  (apparently, you don't know how social media works. If I'm blocked or not on your friends' list, I won't appear on your feed.)

Someone on the thread called me "vindictive". You don't know the half of it, buddy.
Let's be clear. I don't have some strange, illuminati-based power against the OSR you all have to wear tin-foil caps to avoid. I am not an influential voice within the OSR, and I don't strive to be. I don't even run OSR games anymore, aside from Lamentations of the Flame Princess, which, aside from the system, is definitively NOT an OSR game. (wait. this is double speak. It's built off of B/X, the rules are certainly OSR and LotFP is sold to the OSR, but it's not OSR)

If you want to see all of the times he's mentioned me by name in his blog, take a look here:
https://www.tenkarstavern.com/search?q=stacy+dellorfano

The first part was so wildly successful, that he's made a second part:
https://www.tenkarstavern.com/…/the-tavern-chat-podcast-e13…
https://plus.google.com/+ErikTenkar/posts/NJtwS1yHkyx

Now, since Erik can't read this himself unless he logs out of Facebook, I expect one of his lackeys to take screenshots and share it with him. Go ahead, stick your nose right up his ass, I'm sure it smells splendid. (Nope, they did fine)