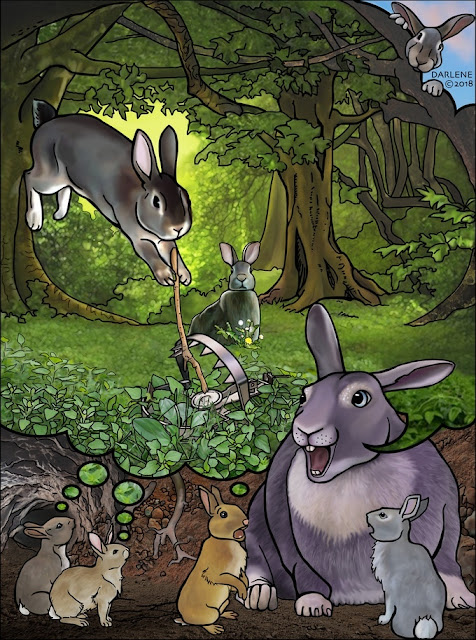 Silly Wabbit! Adventuring is for kids! Wait, you killed the cat that attacked you and then you and your fellow rabbits did WHAT?!?

Yep, I ran a playtest session for the new Bunnies & Burrows early on with my regular group and it was a blast. Don't ask what happened to the cat. That which has been seen can't be unseen, and it was certainly unseemly ;)

I spent an evening at NTRPG 2017 talking with Dr. Dennis Sustare long into the night about Bunnies & Burrows and I was enthralled. The man knows his source material and is passionate about B&B. What more do you want from your game designer? ;)

$25 for the PDF, $40 for the softcover (with a free upgrade to hardcover if the stretch goal is met)

There are other pledge levels, but there seem to be the sweet points for me.


Bunnies & Burrows (B&B) is a role-playing game (RPG) that features animal characters contending with enemies and hazards in a world of nature. Published by Fantasy Games Unlimited in 1976, the game centered on intelligent rabbits. It introduced several innovations to role-playing game design, being the very first game to allow players to have non-humanoid roles, and the first to have detailed martial arts and skill systems. Fantasy Games Unlimited published a second edition of the game in 1982, and the game was modified and republished by Steve Jackson Games as an official GURPS supplement in 1992.

As rabbits, player characters are faced with dangers mirroring those in the real world. The only true "monsters" in the game are humans, but there are many predators, traps, and natural hazards. The characters' position in the food chain promotes an emphasis on role-playing and problem solving over combat.

Originally published in 1976, only two years after the first role-playing game Dungeons & Dragons was published, this original edition is now long out of print. The game was inspired by Richard Adams' fantasy novel Watership Down, and the players were given the opportunity to take on the role of rabbits. As such, the game emphasized role-playing over combat, and according to Steffan O'Sullivan, "You're playing a rabbit, after all — how much combat do you want to do?" David M. Ewalt, in his book Of Dice and Men, commented that Bunnies & Burrows "pushed setting even farther" than other early RPGs like Dungeons & Dragons and En Garde!, as the "player characters were intelligent rabbits and had to compete for food, avoid predators, and deal with internal warren politics.

Full disclosure: Yes, I am "A Frog". Technically, I'm the Convention Coordinator for Frog God Games, but I think that just means I run games and sell shit at the vendor table ;)  Bunnies & Burrows is being published by Frog God Games. See, there IS a connection. I'm also a backer of Bunnies & Burrows. It's simply good.
Posted by Tenkar at 9:31 PM