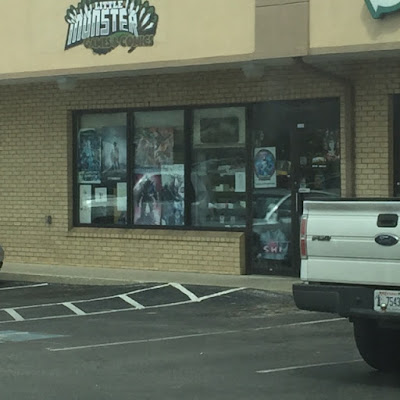 It's been a busy day here at The Tavern. Beleive it or not, now we have some news from our very own #ConManKen that he posted on Facebook. Actually, I'm surprised it took this long:


As of 6pm tonight, I am no longer manager/owner of Little Monsters Games & Comics, LLC. I will be staying on till the end of the month to help with the transition of new owners. I will begin persuing a full time career in the motion pitcure industry as well as finishing up some unfinished kickstarter business. I appreceate all of you who have helped my time at Little Monsters an incredable experience.

Yep folks, its time for a new episode of ConManKen Goes on the Lam with Marcus playing the part of the chief enabler.

Now, let us be real. Ken was NEVER the owner of Little Monsters. It was a shell game that benefited both Ken and Marcus UNTIL Ken was served last week with a lawsuit. The store being in Ken's name, even if only on paper, put Marcus in an awkward spot. Spotting Kenny a few bucks and giving Kenny a place to sleep (even if it was a cot in the store's office) is one thing - being on the hook to lose a whole business because of Ken's past shenanigans is a totally different ballgame.

Full time career in the motion "pitcure" industry? Where? He has a rep in Atlanta and it isnt a good one. The West Coast won't take him. Vancouver, maybe? He can claim refugee status in Canada ;)

As for the unfinished Kickstarter business - it's ALL unfinished. Not some of it - ALL of it.

Psst! Kenny - the business you sold may still be at risk from your current lawsuit, as the "sale" happened after you were served. Just a thought...


edit- I originally had "Lamb" instead of "Lam" in the post title. I blame it on Ken ;)