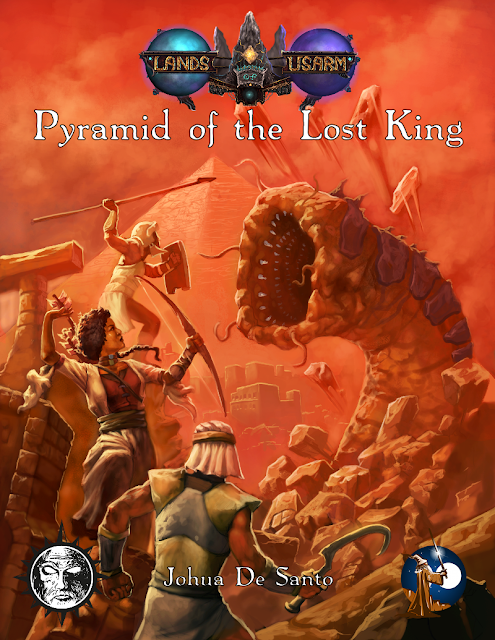 The Tavern is always happy to share guest posts from members of the community. Just use the Blogger Contact Form on the right side of this page or email us at tenkarsDOTtavern at that Gmail thing with "Guest Post" in the subject line to make your pitch.

Now on to our guest review by Doug Kilmer.

Pyramid of the Lost King is a mini-sandbox (literally in this case!) that includes a collection of short adventures written for the Swords & Wizardry rule set, but like most OSR products it is compatible with many of the early rules versions and later clones. The product is the result of a successful Kickstarter project in 2015. The electronic product is 107 pages long, including the cover, 8 pages of interior cover, introduction, table of contents, backers list, and OGL license info. The remainder is adventure and setting information.

In full disclosure, a pdf version was provided to the reviewer gratis by Joshua De Santo of Genius Loci Games. The game is available in electronic format from RPGNow (http://www.rpgnow.com/product/196455/Pyramid-of-the-Lost-King?affiliate_id=1446)

The adventures in this product are set in the Lands of Usarm, a world that has undergone a long ago upheaval and is replete with ancient technology (magic?). Refer to the publisher’s blog (http://geniuslocigames.blogspot.com/) for more information on the Lands of Usarm and material available on this setting (more information on the setting’s history would be helpful, but is not required, to use this product. Especially if the GM drops this into his own world).

The core of this product is five adventures, three of which are dungeons, culminating with the title piece namesake.  The adventures are designed for S&W 1st through 5th levels.  There is a nice breadth of dungeon, wilderness, and city encounters in the document as a whole. Not only does the game provide the adventures, there is a lot of information on the sandbox setting. It includes information on the great Saragubi Desert and the significant places within: the City of Basq (a merchant-controlled trading city), the Sangab Rift, the Narrows, and numerous other locations. The setting as a whole can be easily dropped into most any campaign world. Like a good sandbox, the locales in the desert can be explored as the players choose. There is enough content to be the basis of play in this area for a significant amount of play time. It would require the GM to invest in creating encounters and finding creatures appropriate to this ecosystem, but there is a strong setting framework already in place.

The adventures are well written and are a good length for 1-2 game sessions each, depending upon how long your gaming group plays at one time. Creature stats for encounters are presented in-line with each encounter (not in an attachment at the end). This makes for easier use, but some detail on how to play certain monsters or encounters would help for less experienced GMs.  I won’t go into details of the adventures here to avoid spoilers, but have to give a shout out for several of the encounters to wet your whistles: Ratmen, Rusted Sentinels, and a Great Worm. Now, that is a nice spread that warms any dungeon crawler’s heart.

The encounter maps are also well done, in that they are actually useful as drawn. They are hand drawn black & white, clean lines with just the right amount of information – not cluttered or confusing. For those that use gaming mats or paper, the dungeons are easily recreated to scale for miniatures use. The rooms are keyed to the written content as well. I like that each location has a unique title, but also appreciate they did not put this on the maps. The hand-drawn style is an aesthetic I am particularly fond of. I would play the adventures in order as they appear in the book (which may not work with a sandbox approach), as they play well in that order and become more challenging (and interesting) in that order.

The author also went to great lengths to provide random encounter tables. These encounters are great for getting groups from location to location in play time. Each table comes with brief explanations of each encounter and quick stats – just enough info to put into play immediately if rolled but not so much that it bogs down play while the GM is reading.

The end of the document contains the obligatory new magic items specific to the setting. Nothing earth shaking here, but they are good window dressing. There is also one new spell.  As mentioned above, creatures are presented within the adventures themselves rather than consolidated at the end in a separate appendix.

The Not So Good…

There really is not much about this product that isn’t useful or well done.  As typical, we would all probably like more detail. That is the hallmark of a good setting. More guidance on how to tie the five adventures together to create a mini-campaign arc would be welcome. I would also have liked to have seen more new and original monsters for this locale, or at least a general listing of where standard monsters appear and how they can be used. Many of those in the adventures seemed like standard rules creatures with new names. Maybe just giving them some setting relevant powers would help.

There is one mini-adventure, Relics of the Lost Age, where not having more information on the history of Usarm is a bit disconcerting. The adventure involves the ancient technology, and again while not necessary, more context would be appreciated.

From a production standpoint and appearance, the artwork is a bit on-again, off again. The juxtaposition of some of the finer pieces (including a very fine cover) against the weaker work is a bit off-putting. For example, a nice black line depiction of a priestess in Temple of the Fallen God which has a nice pulp vibe is followed on the next page by an elven female adventurer or caravan survivor that is almost anime in proportion.  It is understandable and common among smaller publishers to have to use a variety of stock art to adequately fill a product, but more careful consideration of pieces used and trying to be consistent would have helped. Overall, though, the art is fairly good and it does not take away from the quality of the content.

Not sure this is really a negative, but to be used to the maximum, this sandbox like others will require some input and effort from the GM. Especially once you are past the five written adventures. It also requires good planning on how to tie the adventure locales and other random encounters together in a coherent fashion for more discerning gaming groups.

There is a lot of good in this product as described in the preceding so I won’t rehash that. The setting, the adventures, and the quality of the writing are all notable. The content will be easily recognizable to any fan of the OSR, which I also consider a plus. The setting can be easily dropped into any homebrew world that has a varied geography. That’s actually one of the best values of this product – its depth of use and versatility. The book offers just enough detail to be playable, yet leaves plenty of room for the GM to exercise their own creativity and expand upon the setting as they see fit and as fits their world. There is a lot of value in this book at the price (pdf $10.00 as of the writing of this review). This product is more than loosely linked adventures. It truly is the basis for sandbox play. GMs and players both will get a lot of value from this book.

On the old five star system, gotta give this a solid 4 out of 5.

Yep, that's an affiliate link above. Keep the lights on and the taps flowing here at The Tavern :)