Dungeons, Dragons and the One Day Trial 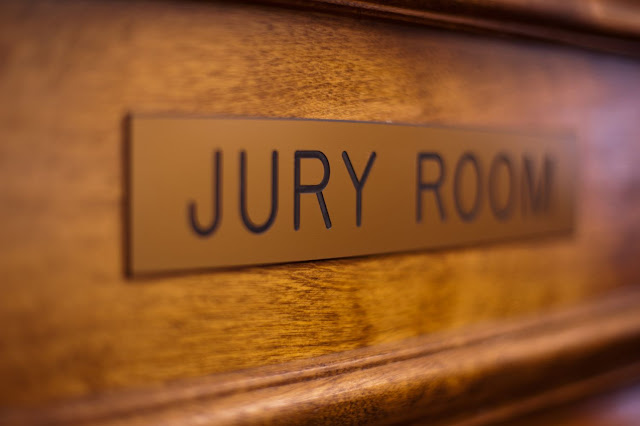 As I mentioned on Thursday, I had jury duty this week. Thursday I got picked for a Civil Trial Jury, despite being a retired cop and listing under hobbies: write role-playing games. Go figure.

In any case, we were sworn in on Thursday for a trial that was to start (and possibly conclude) on Friday. Friday morning came and we got off to a late start. We reported at 930 and didn't get called into the courtroom until 1030. Then we couldn't start because the lawyers needed water. Then a bigger oops - both the complainant and the defendant were Bangladeshi and the court translator was late. For a summary trial, one that is supposed to be expedited, we were not off to a great start.

Opening statements. Complainant's initial doctor for the injuries from the accident is no longer licensed to practice medicine. The surgeon has his license suspended. And this is from the complainant's lawyer. Defense attorney's first name is Lord Chester. I kid you not. I was already thinking that I need to use that name in an adventure.

Both the complainant and the defendant make for horrible witnesses. Due to the language barrier, it was apparent that neither was prepped by their law firms for trial.

Who referred you to your doctor? A friend. What's your doctor' name? I don't know, its in the paperwork. Didn't you see the same doctor for two prior accidents? I don't know. Isn't your testimony different now than in 2015? My eyes are better now. I see better, clearer. My eyes are in my mind...

The defendant wasn't much better, only coming out of her shell to explain how she inched her car up at the intersection only 5 or 6 inches at a time.

I told my fellow jurors we had two bags of shit.

Before we knew it, it was shortly after 4 pm, we had two huge packets of evidence, and only 20 minutes to reach a verdict before being sent home for the weekend and returning Monday.

We returned to the Jury Room and start discussing. He's full of shit, she's full of shit. We have a packet of questions to answer and no ones taken a look at them. I grab them, as reading and understanding rules is the specialty of gamers.

"There's no way in hell I'm giving this guy a cent, he's full of shit!"

"How about we look at the questions given to us? Depending on how we answer the questions, we may not need to answer later ones."

"Questions are answered in order, and then we can see where we are at. Times a ticking, and I'd like to not be here on Monday, agreed?" Heads nod.

"Alright, question one. Do we find the defendant to have been negligent in her actions?"

"Not the question. She had the stop sign. The complainant didn't. As the law was explained to us by the judge, she had the responsibility to ensure she entered the intersection safely. We need to answer the questions as we were instructed to." I wanted to add "no houserules, we're going By The Book" but they wouldn't have understood the reference.

"Alright, listen, question 2 is: Was the defendant's negligence a significant contributing factor in the incident? I'd say no."

"What does that mean?"

"It means she was negligent but he was much more so. It means we answer no further questions. Nothing about awarding damages. I feel the plaintiff was lying throughout most of his testimony, so I will take the defendant's word on what happened. Besides, looking at the accident report, he never even attempted to avoid the collision."

"So long as you all signed off on the 2 questions: Yes to the first one and No to the second one." And then we were.

In the end, game training kicked in. Read the rules. Follow the rules. Given a puzzle, take it step by step. Don't let the rules play you but make the rules work for you. Well, that and we apparently needed a caller, so I stepped in ;)