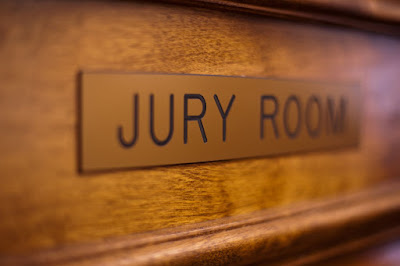 I reported to Jury Duty today. I was on standby all week and Wednesday Night my number came up. It wasn't unexpected, I saw how close we were getting and the odds of escaping my civic duty wasn't good.

I reported to the Civil Court House. Myself and about 100 other mostly disgruntled New Yorkers.

First panel was pulled at nearly 11 AM. I escaped. Second panel about 20 minutes later. Dodged that one too, but now the pool was smaller. We're all gamers, we do odds for stuff like this in our heads. Would we make it to 1 PM lunch?

Just before Noon, another group of Jurors are called. I'm it. Save failed. One of twenty, marched off to our doom.

There are two lawyers in the room waiting for us. We get handed questionnaires to fill out. Occupation? Retired. Know anyone currently or formerly employed in law enforcement, including yourself? Affirmative. Hobbies: Write Role-playing Games. If that ain't a dodge, I don't know what is.

Seven names are called. I'm in seat number four. The first lawyer starts giving some background, the second demands a conference outside. A minute later, they are back.

We are told its a "Summary Trial". Should be over in a day, two at most. Now I want in. THIS is a winner, and much better than sitting around a courthouse for a week or two on some never ending trial when I could be doing something fun - like writing role-playing games.

The first lawyer starts talking. The second gets agitated. They leave the room, this time for ten minutes. I picture in my head the two fighting like gladiators to decide who is the dominant lawyer. Then I remember they are lawyers. Picture gone, filled with lots of "Objection!" and "Overruled!"

After we are sent to lunch, the questions begin. I'm the fourth seat, so I get to see where the questions are going, or so I thought.

"Mr Tenkar, it says here you are retired? What job did you have before retirement?"

"Color me surprised! I never would have guessed." He smiled. I guess we do have a certain look after 20 years.

"So, during those 20 years as a police officer, you must have prepared hundreds if not thousands of reports, is that not true?"

"Perhaps, but I'm a bit distanced from those reports. I spent my last 12 years off patrol."

"What was your last assignment Mr Tenkar?"

"Hmmm. So, what do you do now that you are retired?"

"There's money in that?"

"Not a lot. But I do get sent to a couple of conventions every year on the company dime and it keeps me busy in beer money." There's some laughter in the Jury Panel. I went too far, damn it!

"When I retire, that's the kind of retirement I want."

He then went on to question the next potential juror.

Ten minutes later, I was on the jury. Wonder if I should break out SWCL in the Jury Room tomorrow ;)