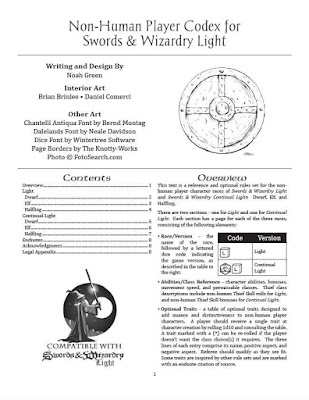 I meant to mention this release earlier, but the week has been a busy one. But now that I'm home from Jury Duty (The Six Angels of Justice rendered their verdict at 445 PM ;) its time to play catch up.

Abilities/Class reference for core SWL and SWCL non-humans (Dwarf, Elf, Halfling).
Trait tables to add nuance and distinctiveness to your non-human characters.
All in a convenient, concise, and easily-printed reference.

Dare to be different with your demi-human PCs, while keeping the rules light!

Yep, that's an affiliate link above. Shoppin' through The Tavern's affiliate links keeps the taps flowing and the lights on here at The Tavern :)
Posted by Tenkar at 6:47 PM