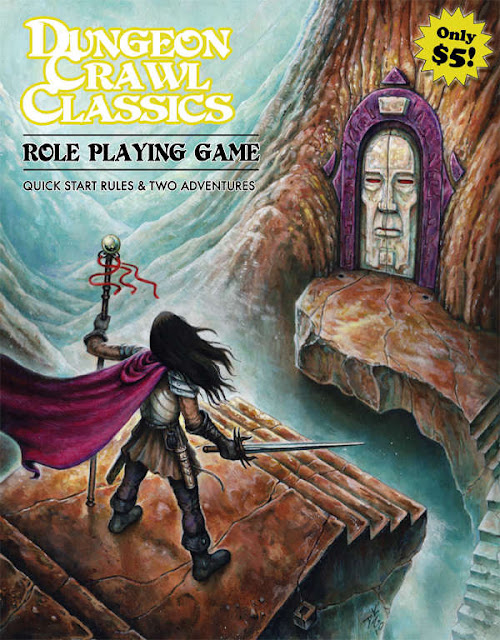 If you ever were intimidated by the shear size of the DCC rulebook, here's you chance to find a slightly lighter version for a whole lot less.

I have this in Print (along with the original rules) and I must say its an awesome distillation of the DCC RPG rules. Well done +Jim Wampler


These starter rules were written specifically to introduce judges and players to the DCC RPG system. In some areas, rules have been condensed and simplified. These rules will serve primarily to get characters through their first level 0 adventure and their first level 1 adventure. Although the rules go up to level 2, for the full DCC experience and play at levels up to 10th, please refer to the Dungeon Crawl Classics RPG rulebook!

This book includes two adventures! You get the enduring classic Portal Under the Stars 0-level adventure for new players, plus in a flip-book format, an all-new level 1 adventure, Gnole House by Michael Curtis, inspired by the works of Lord Dunsany and Margret St. Clair who first wrote of the creature called the “gnole,” which Gary Gygax later evolved into the better-known gnoll!

Purchases made via The Tavern's affiliate links put a small percentage into The Tavern's coffers.
Posted by Tenkar at 9:31 AM