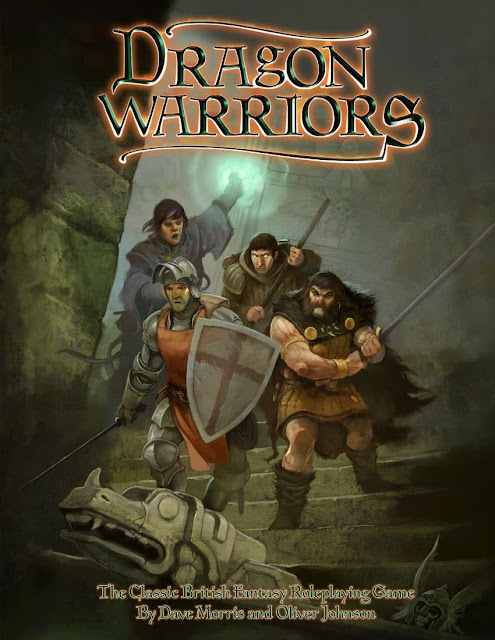 I remember the ads for Dragon Warriors in the old Dragon Magazine issues. I always wanted to own a copy but never found it here in the states.

Then later in my life it came back in print, and it was available in PDF and POD. I snagged the POD the moment it was up. Its on my short list of games I've always wanted to play and never have.

Right now the Dragon Warriors PDF is free. I've heard its free through the end of August but don't wait, grab it now.


Enter a world of magic, folklore and danger. Here, superstition covers peoples' lives like autumn mists cover the moors, and terrifying monsters with bizarre powers lurk in the shadows. The king is a weakling, barons scheme against each other, and lordless knights, back from the Crusades without the honour or riches they were promised, roam the countryside in search of adventure - or prey.

Ruined castles and barrows are the lairs of the supernatural, or newer, more sinister masters. Labyrinthine underworlds lie forgotten below ancient temples and city cellars. The dark places of the world hold riches for those who would search for them, and the keys to great power, and death.

These are the Lands of Legend, and they need heroes. Brave knights, courageous barbarians, cunning sorcerers, mystics trained in the powers of mind and body, sword-wielding warlocks, elementalists who command the fabric of reality itself, and assassins trained to bring death to the deserving. All these will be your comrades on the path to glory - and perhaps your enemies too.

Will you accept the challenge of Dragon Warriors?

Dragon Warriors is a classic fantasy roleplaying game, originally released in 1985-6 by Corgi Books, relaunched in 2008 by Magnum Opus Press, and now published by Serpent King. This rulebook contains full details for creating characters and all that players need to adventure in the Lands of Legend. It also holds information on over 110 different monstrous species, 192 spells from four different schools of magic, and more than 80 unique magic items, artifacts and relics, as well as sections on jousts, crime and punishment, disease and madness. There's advice for novice Games Masters and players, suggestions for building your own game-world tailored to your tastes, an introductory scenario to begin your adventures in Dragon Warriors, and much more.

Remember, purchases made via The Tavern's RPGNow affiliate links kick back a percentage of the sales to support The Tavern. Yes, Dragon Warriors is free but you might buy something with it. Hint, hint ;)
Posted by Tenkar at 10:58 PM