Kickstarter - The Blue Vale: A Tabletop RPG in Augmented Reality (pay no attention to the man behind the curtain) 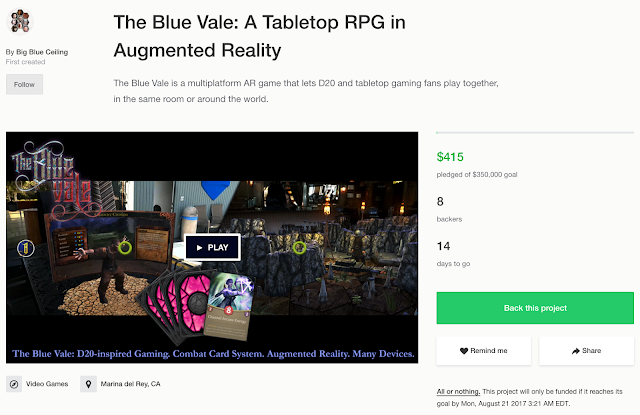 I've been told I woke up on the wrong side of the bed today. Its possible. Of course, when I did a search on Kickstarter for "rpgs" this is the one that stuck out to me: The Blue Vale: A Tabletop RPG in Augmented Reality.


Besides the D20-inspired roleplaying, I really wanted to incorporate combat card elements. We're using cards - recognized by the user's device - to provide certain advantages during the game, temporarily improving a character or group's stats. We'll be doing extensive testing after the Kickstarter to fine-tune the rules to support the best balance, but this keeps a powerful tactile component that's such an essential part of tabletop gaming.

See, that's not necessarily tabletop gaming. That's card based gaming, but that's just one part of tabletop gaming. Warhammer, Euro-style games, board games, non D20 based RPGs - they don't use cards like Magic and others games do.

Now, there is a team of 8 involved in this project, which explains the $350k goal - everyone wants to eat. Spend a minute watching the choppy video and you realize what you are being shown is no where near being ready.

Here's the pitch for the game / setting:


The Blue Vale allows for solo, or, importantly, group play - from 2-5 players, typically, both locally (in the same room), or remotely (across the world).

The journey begins in a quaint woodland village, like many fantasy stories. It could be Tolkien's Middle Earth - but if it is, it's nearly a thousand years later.

Magic has become a commodity - like electricity - and though it is commonly in the world, few know how it works beyond vague generalities, much the same way as we "understand" how our cellphones and TVs operate.

A corporeal manifestation of dark fae magic has grown out of control, a sinister power slaking its thirst on the living and the dead. Like a haunting of a place after a traumatic mortal event, this psychic stain grew ever more powerful as it drew upon light and dark alike. It began reaching out to claim the lands in its deadly tendrils.

As the power grows, it cripples the natural world - overtaking forest, village and stream with dark tendrils of choking undergrowth. It is a visage of sickness and despair, made sentient floral flesh. Poisonous root, noxious flower, and strangling vine grown from an undead tree.

And so in our village, things aren't quite right.

Life in The Village is good, if a bit monotonous and rough. The old folk say that the plants used to grow for longer, used to produce more fruit, tools used to last longer, roads used to be better maintained - but old folks everywhere like to complain. So who can know if it's true? Maybe things have always kinda sucked.

Life in The VIllage is good. It’s not just true - it’s a saying. “Blauvel guut!” Shopkeepers say it to visitors, friends utter it to one another. Life in the Blue Vale is good! As signs of The Threat begin to appear in the forests surrounding The Village, our protagonist awakens to a strange, distant noise. She goes out to investigate and finds the People of the Wood beginning to stop their tasks and wander toward the edge of town, together staring into the woods, toward the mountains beyond. They are murmuring, seemingly to themselves - and appear nervous and afraid. A few return to their daily tasks, while the majority remain swaying and staring into the forest much of which seems to be shrouded in a curious black mist.

After speaking to some of the People, our protagonist(s) then gather supplies and head out to destroy The Threat. As they travel across the hills, they notice that dark vines are choking the plants and the blue flowers that are synonymous with the Blue Vale are dying.

I'm not sold. I think software where you could run a "virtual reality" RPG game would be awesome. I don't think this is it.

Did I mention the cards involved in this game are "random boosters?"

There's a lot to read but not much to excite.

$350K is a HUGE number to hit, especially for an unproven software content provider. $415 with 2 weeks to go isnt going to hit the mark. Heck, it isnt going to be in the same room.