Gygax Memorial Fund - When Does Failure Become the New Reality?

You know, it blows my mind that it is 1 week short of 15 months that I first kicked the tires of the Gygax Memorial Fund. Admittedly, I should have been looking sooner, as someone "in the know" raised some flags with me over beers a few years earlier, but then we had Hurricane Sandy the next day and it got forgotten.

Not that an earlier look would have made a difference. I would have received the same non-answers then as I did in November of 2015.

Looking at 2016, the only Fund News on the website was the Tom deSanto announcement in July. What little info I had of going ons regarding that dried up months ago (I know someone that knows someone that...), and although I am not at liberty to discuss details, I think its safe to say there is little going on on that front right now.

As for Facebook, the Fund had two posts in 2016. The July deSanto Announcement and this: 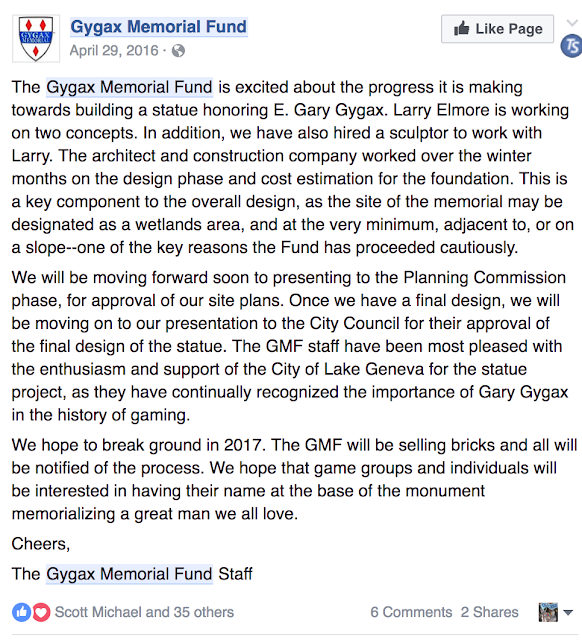 Break ground in 2017? Sure. And @ConManKen is honest and kind to his backers, 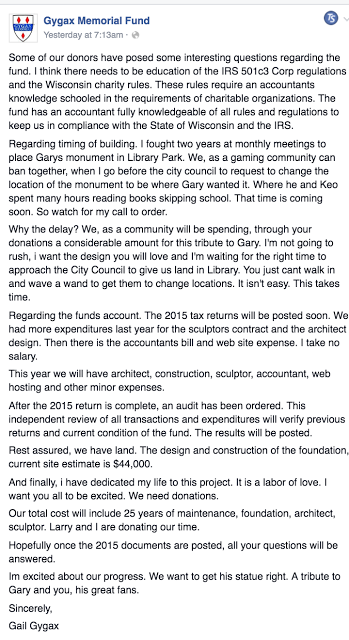 Its from the end of April, 2016. That would make three posts. Now, Facebook can be finicky at times, so maybe someone else can find it. I'd hate to think it was deleted.

Nearly 10 months since the audit was announced. Yep. Not holding my breath, either.

Anyhow, about the statue that has no land (because Gail doesn't like the land designated by the City Council) and the bricks that were to have been sold years ago - this really has turned into one of those fucked up Kickstarters.

I'm still amazed that the money in the fund isnt invested in a low interest earning account. I mean, its free money, and as the Fund is no longer in the habit of raising money from donors, you think they would go for the low hanging fruit. If that isn't mismanagement (not criminal, put just piss poor) I don't know what is.

You know what is truly sad? If it weren't for The Tavern's posts, no one would even remember the Fund these days.
Posted by Tenkar at 11:14 AM