Some Thoughts on an "Organic Sandbox" Campaign 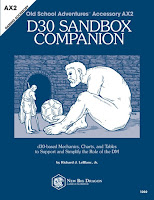 I'm itching to start up a new campaign with the old gaming group and I'm considering if I should make it an "organic sandbox" of sorts.

When I say "organic sandbox", I'm thinking a known but small starting area with requisite dungeon to kick things off, but then resorting to ample use of the following resources:

An assortment of adventures ready to roll

So, here's my idea. With the right resources at my finger tips, I don't even need to be a full step ahead of my players. I need the right maps uploaded into Roll20 that they might find useful (and i need to label them so they are easy for me to reference and know what they do) I get to start my players out with some adventure seeds early on (D30 Books and Tome of Adventure Design will come in handy) and my players will lead the way.

Of course, if they go where I think they plan on going, based on feedback, I may have a step or two on them, but even if they go in some random direction I'll have the tools to be prepared and keep the story moving.

Swords & Wizardry Light will be the ruleset because:

A) I wrote the 4 pages but more importantly...

B) Since its only a handful of pages, the system gets out of the way and should allow for the play to roam freely. As I already have the rules scratched out for levels four and five as well as extra classes, its also a playtest of sorts.

Ideas? Thoughts? Share away. Did I overlook any resources? (I'n sure I did)