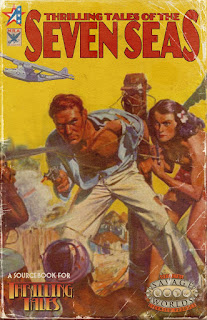 Guess what missed it's vague-ish release date yet again?

But in case you have money burning a hole in your pocket, Gareth did release SOMETHING before the middle of the month passed: Gareth gives you Thrilling Tales 2e: Thrilling Tales of the Seven Seas.

Anything to do with the oft promised Far West? Nope.

Do you care? Probably not. But hey, Gareth cares enough about you to preview THE ENTIRE book. Seriously.

Now, go peek for yourself. If you feel the same lack of enthusiasm for the product that I do, we read the same shit.
Posted by Tenkar at 9:06 PM