Uncle - This is Where You Played Dungeons & Dragons When You Were a Kid! 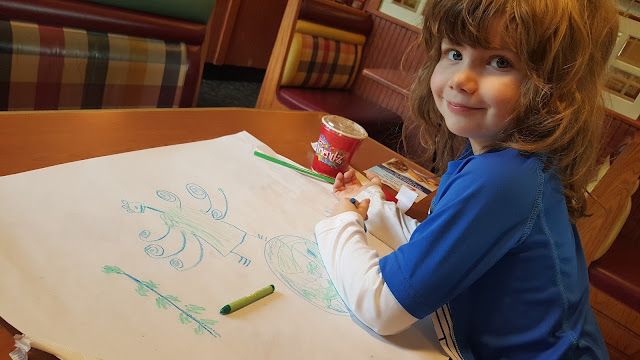 Yesterday afternoon I got some surprise news - my niece was going to stay the night. Shannon is five, and Fridays are "Uncle & Pinky Day" now that I'm retired, as she has swimming lessons (and even before she started swimming lessons, we still made a date for breakfast). So staying on a Thursday night wasn't much of a stretch.

So, last night, as I was doing some wash, Pinky followed me into the basement. After trying to scare me (and me playing along) she stated quite simply "Uncle - This is where you played Dungeons & Dragons when you were a kid." Which was true, I had. Same two family home, now shared by my wife, my son and I with my parents as they and their kids shared it with my grandmother when I was growing up.

I was caught off guard by the comment though, as I had never told her that in junior high, high school and even the early college years, we played in the basement which my senile cat, who at the time treated it like a giant litter box. Not that I blamed Misty. Back when we had oil for heat there was sand all by the oil tank. Where was the gaming table? By the oil tank.

"When I get older, uncle, can you teach me to play Dungeons & Dragons?" Simply music to a gamer's ears. Little does she know that the session of No Thank You Evil! that we played the other week was her introduction to roleplaying. She wanted to be a "ninja with a sword!" so she could stab things, which led to a surprise for me when she decided to sneak each time combat was possible. But I digress.

Retirement is a wonderful thing, even if I'm not seeing all of the free time I had expected. Responsibilities creep up and surprise you out of no where but some of the responsibilities are just full of awesome.

Still, when I put Pinkie to bed last night, with the Amazon Echo to keep her company and answer her questions in the middle of the night, she spoke some simple words of wisdom.

I laughed, gently, and asked her why that was.

She sat up in bed, outlined slightly by the glow from the night light and said:

"You!" and pointed a finger at me.

"Me!" and now pointed a finger at herself.

Oh, and she smiled a smile of pure joy before laying back down for sleep.
Posted by Tenkar at 9:01 AM