I'm Sitting on Review Copies of Mazes & Perils Deluxe and I Am Zombie: Toxicity - Stuff to Read After Gift Awarding 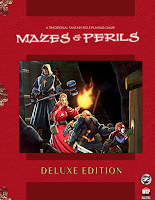 Seems it's hard to say "no" when your mother wants to go shopping at the garden center 40 miles away, as you are "retired" now. Then I had to pick my son's car up from the collision shop (they did an excellent job) and shortly I have to pick my son up from the airport - smack in the middle of NYC evening rush hour traffic. Sigh.

Some gifts from the Chuck Wright Fundraiser will be picked tonight. The rest SHOULD be picked tomorrow, assuming no one else decides my retirement means I'm free to do more random shit. Heh.

Over the weekend I received an unsolicited copy of the first book of the I Am Zombie: Toxicity three book set. I have it in PDF (obviously). I also have the entire press kit. What I would ever do with a press kit, I have no idea. I posted about this Kickstarter earlier.

Today I received the Mazes & Perils Deluxe final version, which should be releasing to the general public in the next few weeks, if not sooner. Fun times to have free time.

So yes, something just jumped line in what I want to read...

edit - Airport wound up being nearly 3 hours round trip and I never left the city. Giftin' in the morning...
Posted by Tenkar at 5:16 PM

Email ThisBlogThis!Share to TwitterShare to FacebookShare to Pinterest
Labels: frog in need, kickstarter, mazes and perils