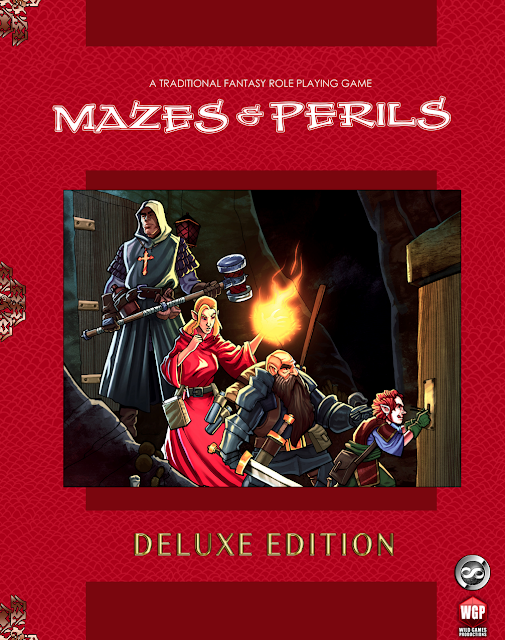 I've had in my grubby little virtual hands the PDF of the soon to be released Deluxe Edition of Mazes & Perils for a few weeks now and I've finally gotten around to giving it a proper perusal. Don't know about Mazes & Perils? The Gold ENnie winning RPG is available for free download at RPGNow. I'm looking at the soon to be released Deluxe Edition with this post :)

First and foremost, the annoying watermarking that many publishers feel they need to make their product look special but usually winds up making the product unreadable? It's so subtle here that it actually adds to me reading experience. Not a whole lot, but it is pleasant. Well, that and it's a dungeon map or maze, so very appropriate.

Something that jumps out at me right away is that Dexterity does not adjust one's armor class, for good or ill. Interesting, as it makes armor all that much more valuable and makes the armor-less casters just that much more squishy.

The rest of the ability scores and modifiers are much as your already know, tho' the actually modifiers are a bit different from other OSR games, they are different across pretty much ALL of the OSR games. Close enough to be compatible with others, although fighting men do get the % Strength Roll if their Strength is 18.

Enchanter and Shaman are new. Both have their own spell list and are easily added to the OSR game of your choice with minimal adjustments. 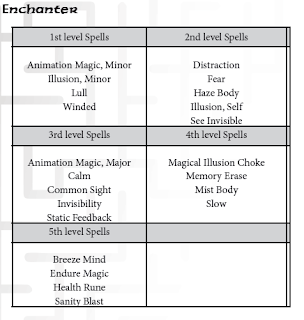 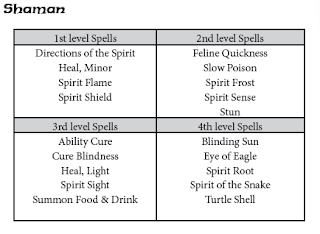 I need to note that this is a five point alignment system, or is it four points plus a middle? Lawful Good, Chaotic Good, Lawful Evil, Chaotic Evil and Neutral.

Alright, that's the character stuff. Onwards to Part the Second, where we'll discuss "stuff" ;)
Posted by Tenkar at 7:05 PM