The Gygax Memorial Fund has 5 Stated Objectives - 3 Are Not Related to the Memorial - Why Have NONE Been Implemented?

Over three weeks ago a third party who supposedly had Gail Gygax's ear told me that the audit of the Fund would be posted in the "next week or so". It's been over 3 weeks. I don't expect it anytime soon, but that's not the point of this post. It did, however, get me thinking about the stated objectives of the Gygax Memorial Fund, as they are related to it's tax exempt status.

Edit: Maybe I should have used "accomplished" instead of "implemented" - but whatever, the haven't been done 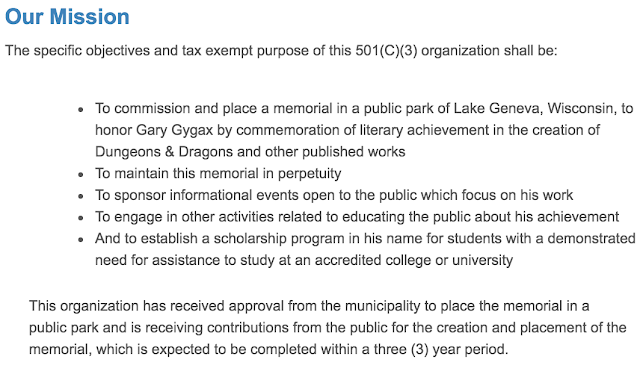 The first two objectives are related to the memorial itself. Many, if not most people following the GMF forget that there are three other objectives for the Fund to fulfill it's tax exempt purpose:

- To sponsor informational events open to the public which focus on his work - In the years of the Fund's existance, can someone point me to any of the above informational events sponsored by the Fund? Isn't this something that could be accomplished while the Memorial Itself is being finalized?

- To engage in other activities related to educating the public about his achievement - First, what does this actually mean? Second, can anyone identify actual examples?

- To establish a scholarship program in his name for students with a demonstrated need for assistance to study at an accredited college or university - Now, I know there is no scholarship program established by the Fund in Gary's name. It's been discussed prior that investing the Fund's monies at a return as little as 1% would have allowed for the establishment of a scholarship of $2,000 a year without effecting the Funds monies. It would also have shown the Fund accomplishing one of it's five stated objectives.

All of the Fund news is either about the Memorial process, donations coming in or requests for donations. I fail to see a listing of any accomplishments by the Fund. It would seem to me that objectives 3 thru 5 would be easy enough (and cheap enough) to implement throughout the years and show accomplishments by the Fund in place of the stagnation that has been the lingering impression.

Maybe the GMF has accomplished goals 3 and 4. If so, that is truly newsworthy and should be highlighted.

Again, if you can point me in the direction of ANY of these missing bits of potential news, I'll be in you debt.