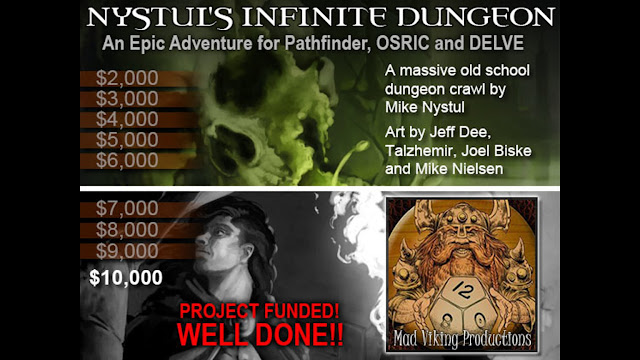 Yep, the Wandering Wizard appears to have wandered off.

Best as I can tell, he's gone from Facebook.

Last update on Nystul's Infinite Dungeon was August 17, 2015, where he gives us this sample of the dungeon he was working on (not a backer only update, all can find this file link - https://drive.google.com/file/d/0BxgyrXrUYkx-YjVZY1JHMGRYTEk/view?usp=sharing

There are some interesting quotes attributed to Mike on the Infinite Dungeon KS comments section. I'm sharing here for the sake of completeness, such as it is.:

Here's a post from Mike, he essentially just proved my point. Based off of all he has said, what he recently posted has no merit. In essence he is just looking for more money.
"Off of Mike's page an hour ago:

"Gamer friends - I am organizing a big book of interesting dungeon rooms that I will be offering KS backers. Many of you have offered to help. This is the time and this is the way. If you are interested in becoming part of "Mike Aid" send me a message describing what you can contribute. I would welcome art, design, editing and people who can check mechanics. I would like to offer rules for Pathfinder, D&D 5th and Old School D&D.

Any contribution will help. I would like to do this quickly. It would make a great birthday present for me. I can't offer payment but will give you credit and will send everyone a copy of the PDF. If this PDF is ever sold all proceeds will go to KS refunds. Thanks for your time and support!"

Here's his take on his obligations to us (which, from his own words, shows that he has no intention on making good on his debt to us):

So Chris, here is the thing. The Kickstarter thing was a disaster on many levels. One of the problems is once it failed and my personal as well as professional finances were trashed I had no resources to do much of anything to move forward. I lost everything. Not asking for sympathy here because it was the result of my bad decisions and miscalculations but i had nothing left and at one point was literally homeless. I pulled down that Indiegogo campaign you mentioned not long after it went up (I collected nothing). It would have been going down that same road, a profoundly bad idea (and in some ways in bad taste). Patreon is a different beast entirely. First, it is meant to be used to support a creator not a specific project. If you like what I'm doing - awesome! Become a Patron and we are both happy! If you don't - don't. The other thing is I went with the "only collect anything when I post" model rather than straight monthly. That way, if i produce nothing - nothing gets collected. There is no way for me to "fleece" anyone. The Patrons have complete control over things like monthly limits and I encourage them to use them. Going back to your original issue, yes, the Kickstarter issues were huge and horrible and I am very very sorry about them. They do not represent my entire career though and my choices were never do this kind of work again or find a way to do it as above boards as i can. People will forgive me for the failed projects and accept the arrangements I was able to make to try to make good or they will not. At this point all I ca do is do better, yes?

I don't think Mike's Patreon is doing much for him these days.

So, any Wandering Wizard sightings? Is he still doing improv in Houston? Driving around in the Wandering Wizard Van exploring the South West? Standing on the side of the road with a sign "Will write games for food and a hot shower"?

Inquiring minds want to know...
Posted by Tenkar at 9:01 AM