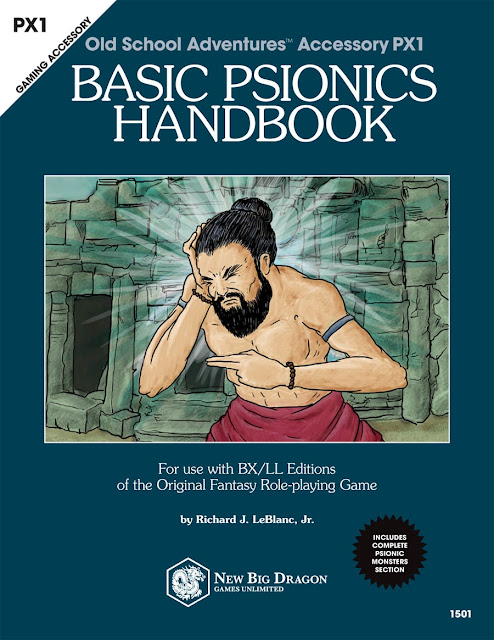 If there was one part of the AD&D 1e ruleset that never made much sense to me (there was more than one actually, but this was probably the worst) was the Psionics Rules section. It didn't follow the rest of the AD&D rules in flavor or mechanics. They felt shoved in, not even tacked on. We tried to use them and never could really figure out how to make them mesh with the core rules.

+Richard LeBlanc has found a way to bring psionics to the common gamer with the Basic Psionics Handbook. It looks very usable with a quick glance through (and if Rich's previous works are any indication, it should be immensely useful.) This is going to the top of my long neglected review pile and has already been uploaded to my tablet ;)


Unleash the powers of the mind into your BX/LL campaign!

Finally, after 40 years of waiting, there’s a psionics system for the classic editions of the world’s original fantasy role-playing game. It’s simple, intuitive, andprovides a gameplay experience that feels at home alongside the original rules of the game. Within this jam-packed 56-page book, you’ll find:

an easy-to-use psionic combat system based on the classic attack and defense modes
complete descriptions for 114 psionic abilities... broken into 6 different chakra/discipline groups... adapated from the best existing resources

instructions on converting psionic monsters from other classic editions

background information on psionic items, and descriptions for 13 specific items
support for mixing spellcasting and psionics