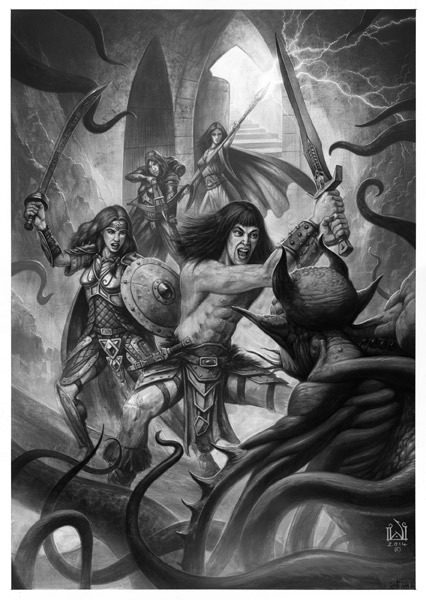 If you're like me, you remember supporting Crypts & Things on Indiegogo a few years back. It was a nice Swords & Sorcery reworking of Swords & Wizardry that really seems to excel with smaller groups. I ran a number of sessions for a pair of friends before real life intervened. They still dropped by NTRPGCon last June and are still itching to play again.

I love Crypts & Things but felt something was missing. Never quite could put my finger on it, but Newt seems to have his vision of what the revised Crypts & Things should be, and I like the direction he's going in:


Art. The art in C&T was done by various British Artists. While I stand by everything I put in the book, the overall tone was eclectic and a bit disconnected.  So David M. Wright, whose style exactly matches the tone of the game, is going to do the entire book. Therefore it will have a deliciously dark consistency and tone throughout.

Judging from the sample pieces of art, this is going to rock hard. Excellent choice.


Content. C&T Remastered will see a a full edit of the book and streamlining of the rules. There’s a few rules in C&T that I never use in my home game, because they involve a bit too much bean counting rather than simple Roll and Effect which I prefer. These rules have been recast into something more straightforward.

Mega Gaming Fun. This is the overall effect of the above changes. Over the years there have been some kind words said about Crypts & Things which have made me painfully aware of some of its shortcomings. With the basic goal I’m seeking to address these issues and make it a much more fun game to play and the art even more evocative.

If you backed the earlier Indiegogo project, Newt has a gift for you if you back the current Kickstarter.

True confession - I was the first backer of this project on Kickstarter ;)

Email ThisBlogThis!Share to TwitterShare to FacebookShare to Pinterest
Labels: crypts and things, kickstarter