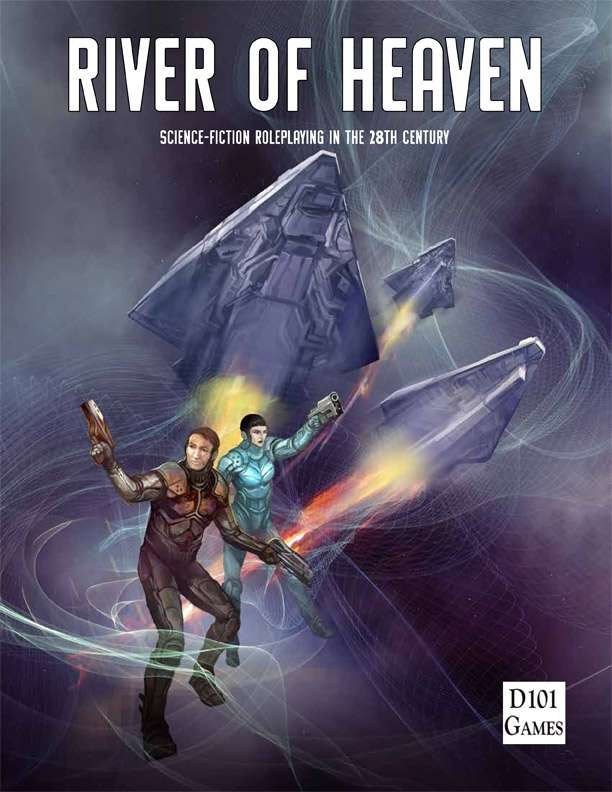 +Newt Newport recently emailed me and asked if I would be interested in giving away a PDF copy of River of Heaven (and it's companion PDF, the adventure Reunion) to one of the readers of The Tavern. I'm no fool - of course i said yes!

This is not part of OSR Christmas (that should pick up again this weekend.) This is a total separate generous giveaway.

River of Heaven takes the OpenQuest rules and ports them to SciFi. OpenQuest is the current version of the d100 / OGL RuneQuest rules that I feel comfortable with. They remind me of the classic Chaosium RuneQuest 2 rules, and those were my go to rules back in the day when I wasn't running AD&D.

I'm damn tempted to take River of Heaven for a spin when life reaches a speed that's manageable. In the meantime I'll brainstorm the campaign that will drive my players happily crazy ;)

So, this is how we are going to do it - post a comment between now whenever I wake up Saturday morning (January 3rd, 2015). One random commenter gets a PDF copy of the River of Heaven rules and the Reunion adventure.

It's already a Silver Best Seller at RPGNow and it's only been out for a week and a half.

(if you want to check out the OpenQuest rules for free, OpenQuest 2 Basic is available RPGNow in PDF)

Here's info from the blurb:

It is the dawn of the 28th Century.

The Third Renaissance, or Bright Age as future historians will call it, is at its zenith.

After the catastrophic first contact with extra-terrestrial life that led to the horrific Solar System war, humanity clawed its way back from the brink and finally reached the stars. For millions of people, Earth’s sun is no more than another star in the night sky, a mote of light, a spiritual birthplace that they will never visit in their lifetimes.

It has been over a century since the Machine Civilisation gifted humanity technological marvels such as the Visser Cube, allowing wormhole travel across the vast chasms of interstellar space. Now interstellar distances grow ever shorter. How the myriad of splintered cultures view this gift varies. Some see it as a blessing, a way to draw humanity into a united whole. Others see it as a curse, robbing them of their individuality. And then there are those who would use it as a means to subjugate humanity and impose their own will upon all…

Across the river of heaven, humanity clings to a scattering of islands in a sea of stars. Players can take on a multitude of roles in this future: a crew member on an interstellar trader, a member of the mysterious Engineers’ Guild, a body-hopping Intercessionist agent – out to manipulate human cultures to its own secret ends, a Renouncer Zealot – intent on destroying Artificial Intelligence in all its forms, or perhaps one of the Reclaimers – planetary engineers dedicated to terraforming any viable planet they happen upon…

River of Heaven uses D101 games’ OpenQuest rules engine; a sleek and streamlined D100 rule set that enables you to maintain the tempo of your stories whilst keeping the rules simple and in the background.

In the core rulebook you will find:

The OpenQuest rules engine - tailored to a hard sci-fi setting.

Enabling you to go from concept to fully finished character as quickly as possible.

Humanity has found many ways to improve upon what nature created. Quickly augment your character with the latest biotech/nanotech upgrades.

All the weapons, armour (those damn Brits ;)and other types of equipment your character might need to go adventuring in the 28th century.

Information on how to get around the River of Heaven universe, be it lowly pack animal on a frontier dirt farm or an interstellar trader equipped with exotic stellar-tap drive.

In addition to a timeline spanning 1000 years of future history, River of Heaven includes an introduction to the Bright Age, the default play setting for the game. It also includes a campaign setting – the Kentauran Hegemony – and information about all the colonised star systems at the start of the 28th century.

Ideas for adventure ideas set in the River of Heaven universe, covering a wide range of styles and themes.

An A-Z list of lifeforms that may be encountered by the player characters during their adventures. It includes humans from the various divergent cultures and castes, mundane animals encountered on many worlds of humanity, and some more exotic creatures too.

Written by John Ossoway.
Posted by Tenkar at 8:48 PM