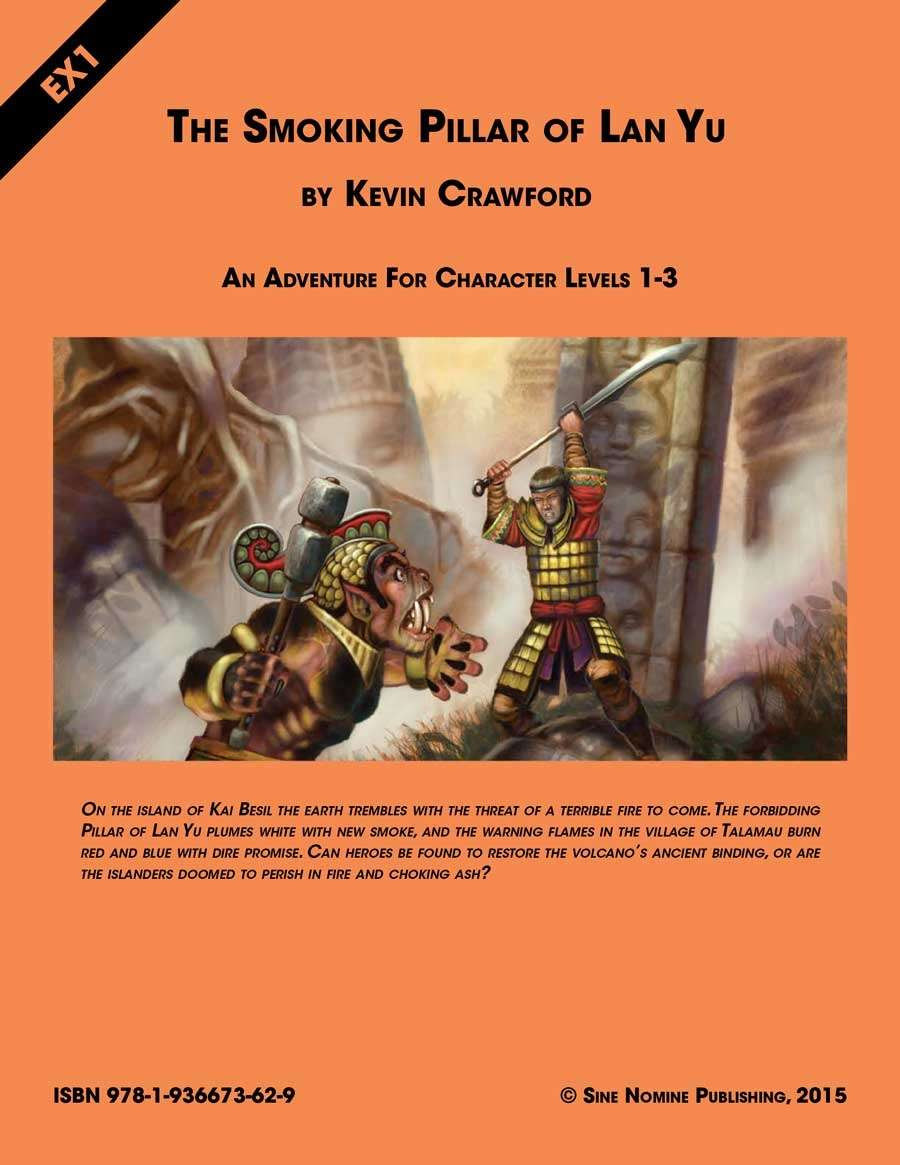 In case I've failed to say this in the past, +Kevin Crawford IS the Man. No, really.

The Smoking Tower of Lan Yu is a free OSR adventure released by Kevin into the wilds of the OSR, but it's more than that. It's a design sample on how to put together your own Old School module. It's also all open, for one to do with as they wish. Even the art. All praise +Kevin Crawford and Sine Nomine Publishing!


On the island of Kai Besil the earth trembles with the threat of a terrible fire to come. The forbidding Pillar of Lan Yu plumes white with new smoke, and the warning flames in the village of Talamau burn red and blue with dire promise. Can heroes be found to restore the volcano’s ancient binding, or are the islanders doomed to perish in fire and choking ash?

The Smoking Pillar of Lan Yu is a playable module for most OSR games, but its real purpose is as a worked example and a resource for other small publishers interested in old-school module page design. The module has been built to echo early 1980-era TSR module layouts, with sections exampling village, wilderness, and dungeon layouts. A "Commentary" layer in the PDF can be turned on and off to explain the particulars of each page's design choices.

The files include the PDF itself, the .IDD InDesign source file for Adobe InDesign CC, and an .IDML InDesign markup file that should be backwards-compatible with many earlier versions of InDesign. An art folder is also included with the art used in the module, all of which was either made by myself or drawn from the free Scarlet Heroes Art Pack available on DTRPG. Any of it can be used freely for your own projects, whether personal or commercial.

All users are encouraged to take the module apart and use its pieces for their own projects. While a perfect replication of TSR trade dress is generally a bad idea in your own work, you can use the objects, paragraph styles, and page layouts for your own products. The commentary layer provides hints as to why the choices were made for each, and you can carry this information into your own creations.