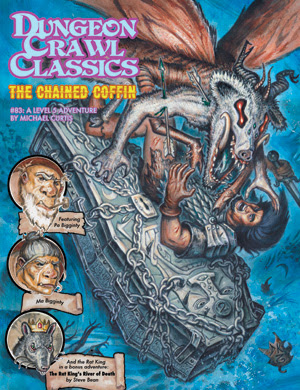 You would think that my recent vacation would mean I'd have time to read through at least some of my recent gaming purchases, but alas, adult responsibilities intrude even on one's vacation. I strongly suspect that much won't be properly read until early 2016.

The Chained Coffin arrived last week. This is a DCC RPG boxed set by +Michael Curtis . This won't be waiting until 2016 to be read. My God but it's a full box.

World of Calidar by +Bruce Heard scratches my SpellJammer itch. I'm working my way through the book now. As an aside, the most recent episode of the THAC0's Hammer podcast discusses, what else, SpellJammer.

Metamorphosis Alpha - Collector's Edition - pretty book, this will probably sit on a shelf until I find myself in a game of MA. Assuming I can find a shelf big enough.

Dwimmermount appears to be a successful conclusion of what was nearly a horrible Kickstarter implosion. Sadly, it's sitting low on the list of stuff to read.

Lost City of Barakus looks to be my next campaign when I pick up the weekly GM reins again, which leaves me some time before I need to dig in deeply.

Transylvanian Adventures for the DCC RPG - not sure I'd even run it, but my God it looks sweet.

BreachWorld - basically Rifts via OpenD6. Need to find the time.

River of Heaven - because I do love OpenQuest and good scifi.

Email ThisBlogThis!Share to TwitterShare to FacebookShare to Pinterest
Labels: stuff on my desktop