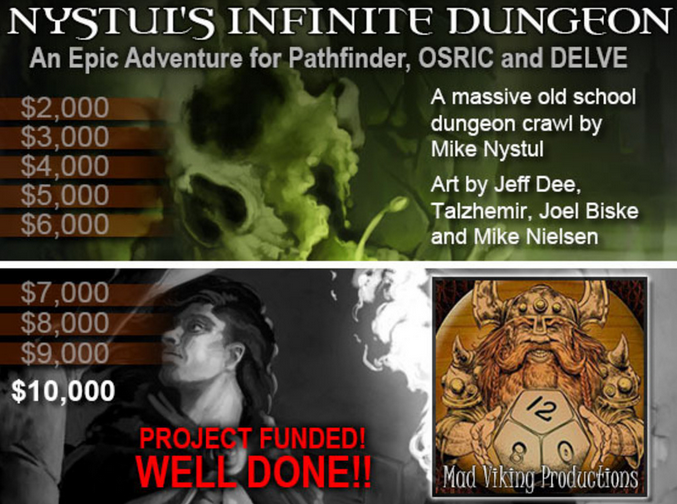 As Mike's last update was back in mid August on this project, I figured I'd share the latest:

I have the files from D3 I will need to get the final version of the initial project to you. I have to do some layout and put in what art I have to make it look as good and be as useful as possible.

Beyond this I plan to put together some additional materials since even though I will be sending out a version of the Infinite Dungeon that you all will be able to use I would like to get you some resources that will better fit the definition of "Infinite". I will say no more since at this point I think simply getting it to you like I did the dungeon tiles will be more effective.

I hope you are all off to a great start his year!

oh, and Mike's response to a request for an ETA:

Creator Mike Nystul about 11 hours ago
ETAs are useless. I can post something but people will respond "lies - you have given ETAs before and they mean nothing". Thing is - they would be right, My track record on this project (and the other Kickstarters) has been awful. There are reasons, but they are immaterial. What matters is performance. All that really matters is what I get to you.

I believe we released an ashcan of the original ID some time ago which was the project developed when I had a team working on it and hoped to do a series. It focuses on an island and an order that protects a dungeon. I can see if that ashcan is still somewhere I can repost if you like.

If anything, Mike is perhaps understating how bad his Kickstarter track record is, but he is better at admitting it than most these days. I will give the man credit where credit is due.

Now, about those other Kickstarters languishing under the effects of Nystulian magic...
Posted by Tenkar at 10:41 AM